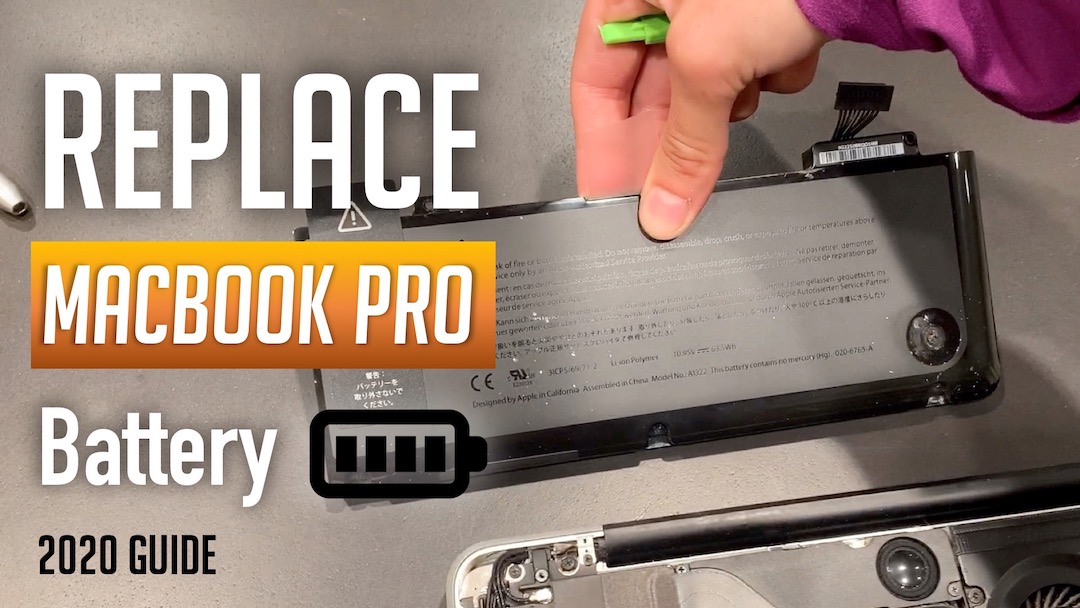 If you’re like me and are still using the Mid-2012 MacBook Pro as your daily driver—whether it’s for business, for school, or just for fun—then you might be faced with the challenge of replacing the battery.

In this tutorial, I’m going to show you how to remove and replace an old battery and install a new one.

Should you replace a MacBook Battery yourself?

Now this tutorial is specifically for the 2012 MacBook Pro, and Apple will not repair anything that’s older than seven years, so even bringing this laptop into Apple isn’t an option because it’s so old. So the only things you can do are either replace the battery yourself or go buy a new computer.

If you have a newer Mac, I recommend checking to see if you have a warranty left before performing this upgrade. Opening the back case and replacing the battery yourself will void any valid warranty if you have one. Keep this in mind before you start.

Since I don’t have a warranty, and Apple won’t touch my computer, I decided to perform the upgrade myself. $40 later and 10 minutes of my time, it seems to be well worth it. 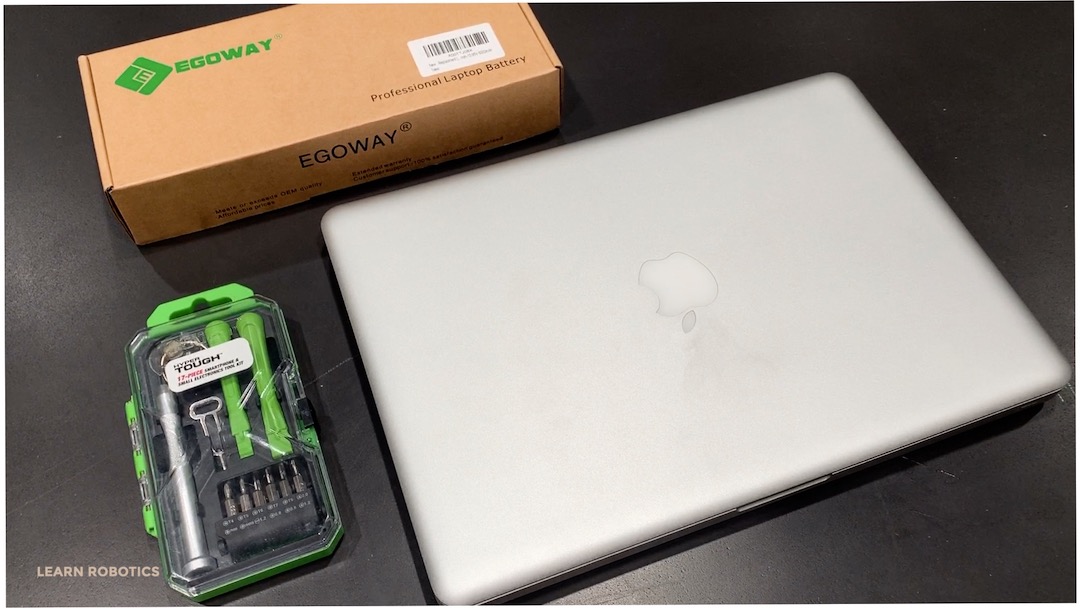 Note: At the time of this post, I’ve only had the new battery for a few days, so I’ll keep you updated on how this battery is performing over the next few months.

This repair project is very straightforward. All you need to do is go on Amazon (or find a reseller for aftermarket batteries), purchase an A1322 battery, and spend 10 to 30 minutes installing it.

If you’re comfortable using a screwdriver and have a bit of patience, I’d say go for the repair yourself. However, if opening your Mac makes you squeamish, you may want to hire someone to perform the upgrade instead.

How to Find the Right MacBook Pro Replacement Battery

I used Amazon to purchase my replacement battery, but you can use whatever online reseller you like (OWC, iFixit, etc.). You’ll want to find an A1322 battery cell that is designed to fit the mid-2012 MacBook Pro.

What I like to do is read through the reviews and figure out which battery has the best ratings. I highly recommend choosing a middle-price battery. Don’t go super cheap on this, because after all, it is a battery, and it’s important to have cells that are quality.

Be sure to find a battery that comes with a screwdriver set. Most battery screws are different than a standard flat or Phillips’s head, so the screwdriver kit will come in handy when you go to swap out the old battery.

I ended up picking the EGOWAY laptop battery for the MacBook Pro. It has good reviews, and it cost me about $40. I also had next-day shipping through Amazon Prime, which was convenient.

You don’t need a lot of tools to perform a battery upgrade on a MacBook Pro. All you need is a Torx screwdriver kit and a spudger.

Unfortunately, most standard household screwdrivers do not fit the MacBook Pro screws, so you’re going to need a set of these if you’re planning on opening up your Mac.

Replace a Mac Battery in 3 Steps

If you’re fortunate to have an older 2012 MacBook Pro, the battery replacement is very easy, and super straightforward. We can perform the upgrade in just three steps.

Let’s go through each of these steps in more detail.

1. Remove the Back Cover

Caution! Before going through any of these steps, make sure your Mac is shut down and unplugged from the AC wall charger.

Then, flip the Mac over, and take your Torx screwdriver and take out each screw sequentially. I like to place the screws next to where they came from on the table. 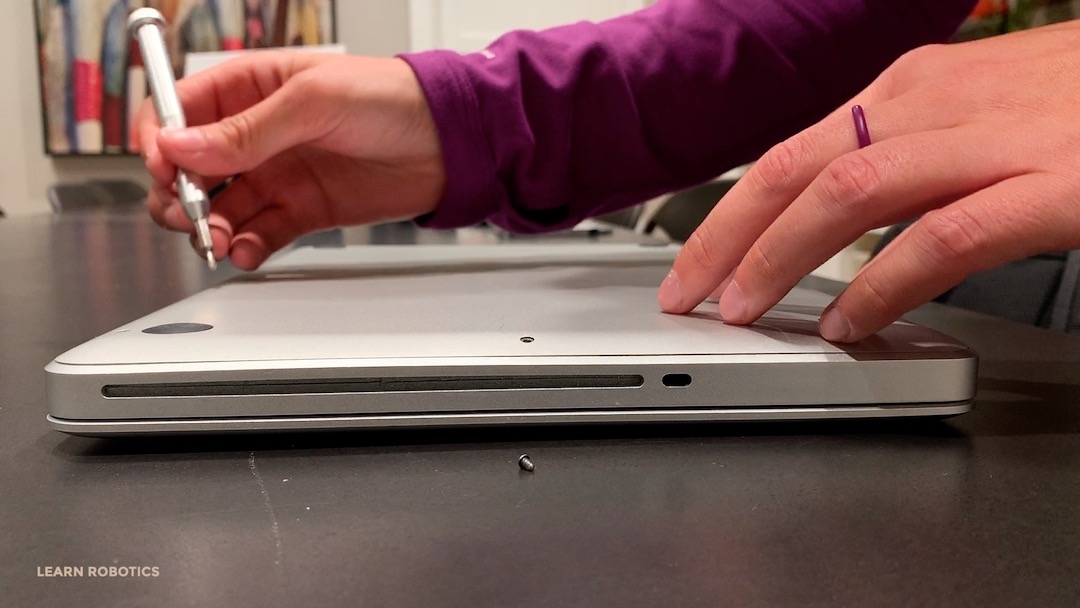 That way, I ensure that the screws go back into the exact location they came from. Some of the screws are a little bit longer than other screws, so it’s important not to mix them up.

Next, take off the cover. Loosen up the edges, and gently lift it off the back of the Mac. Place the cover on your workspace. We’ll come back to it later. 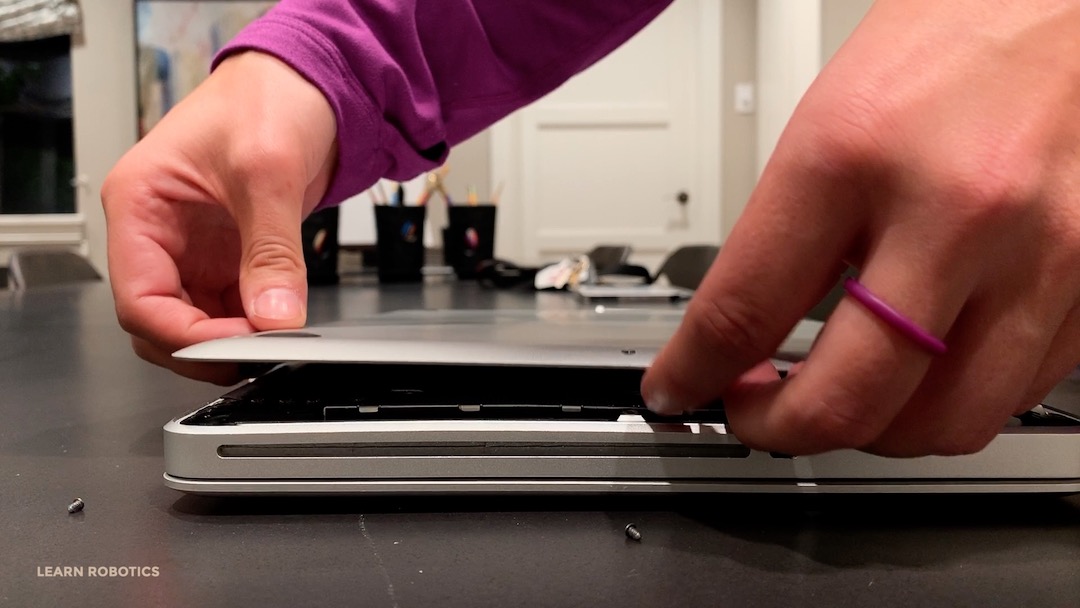 Related: While you have the cover off, you may want to upgrade the RAM and add an SSD.

Now that we’re inside the Mac, disconnect the battery. To do this, grab one of your spudger tools, and gently rock it back and forth around the battery connector. You just want to loosen up the connector so that you can take it apart with your fingers. Take extra caution not to hit any surrounding components. 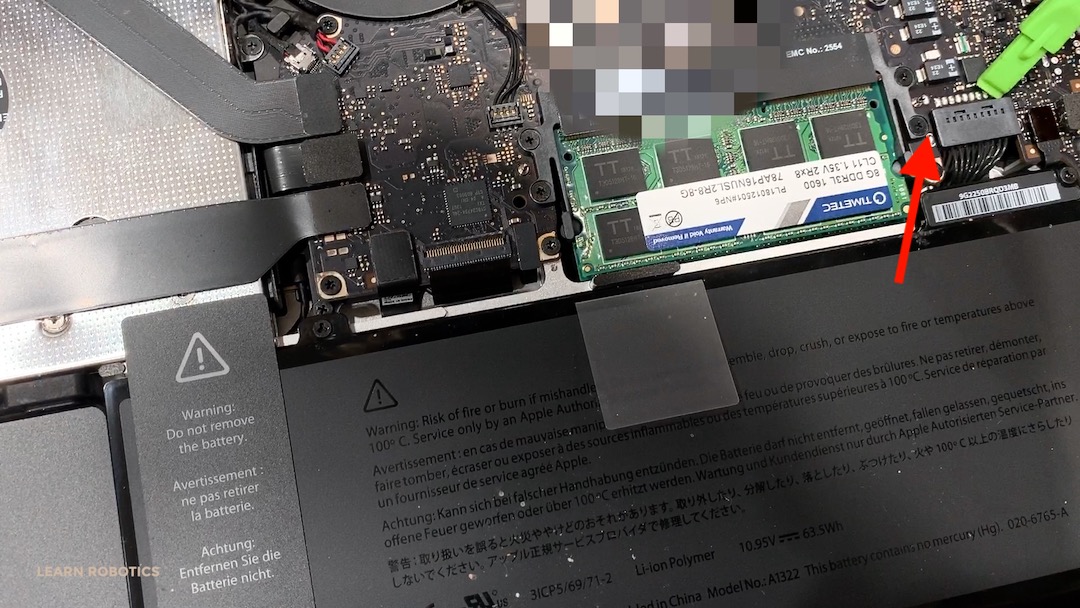 Next, grab the three-prong screwdriver that came with your battery. Standard tools don’t work for these screws (I’ve tried), so ensure that your battery comes with one of these tools. 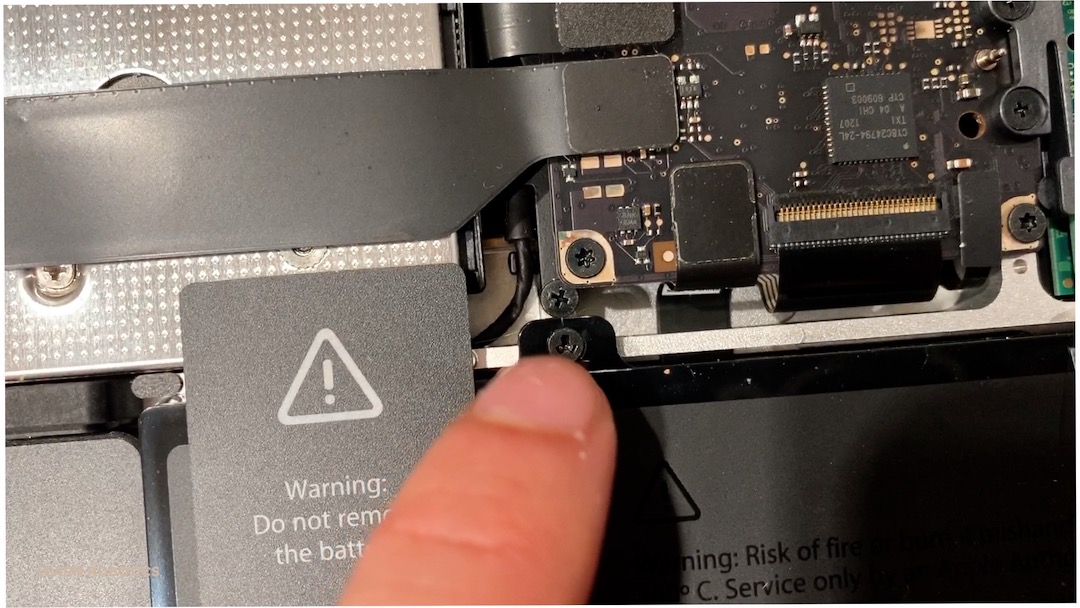 Once you have the screwdriver, loosen up the two screws on either side of the battery. The first screw on the left is smaller, and the second screw on the right is longer. Don’t mix them up, because we’ll be reusing these for the new battery.

Use the flaps on the battery and the spudger tool to peel out the old battery. Wiggle it out of the case, and place it to the side. Then, take the new battery and slide it into place. 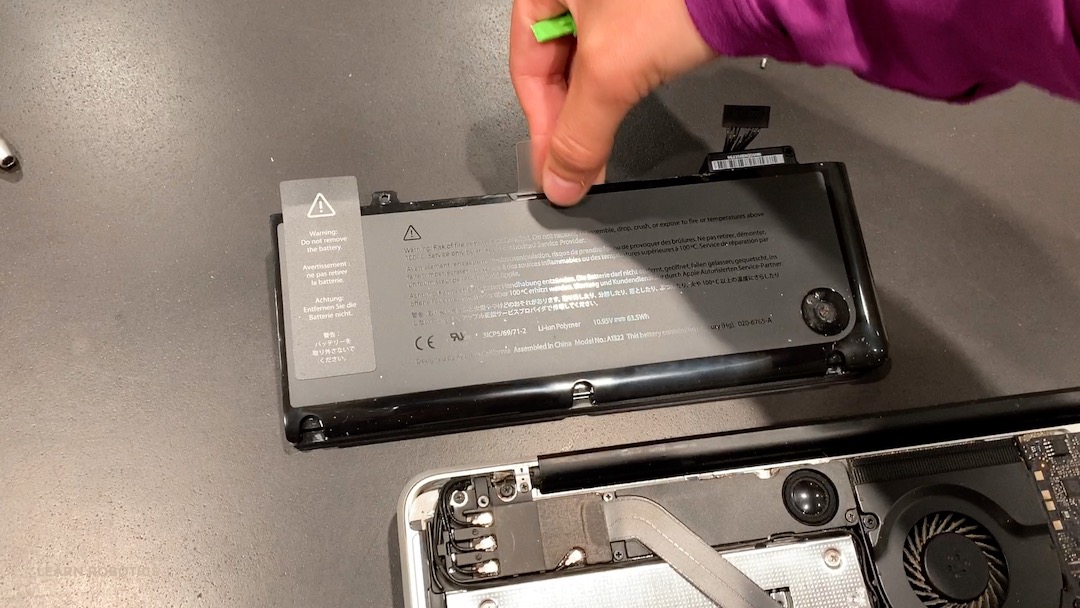 You’ll want to make sure that you give yourself enough space on the connector side so that you’re not squeezing the cord down. Don’t connect the new battery just yet. 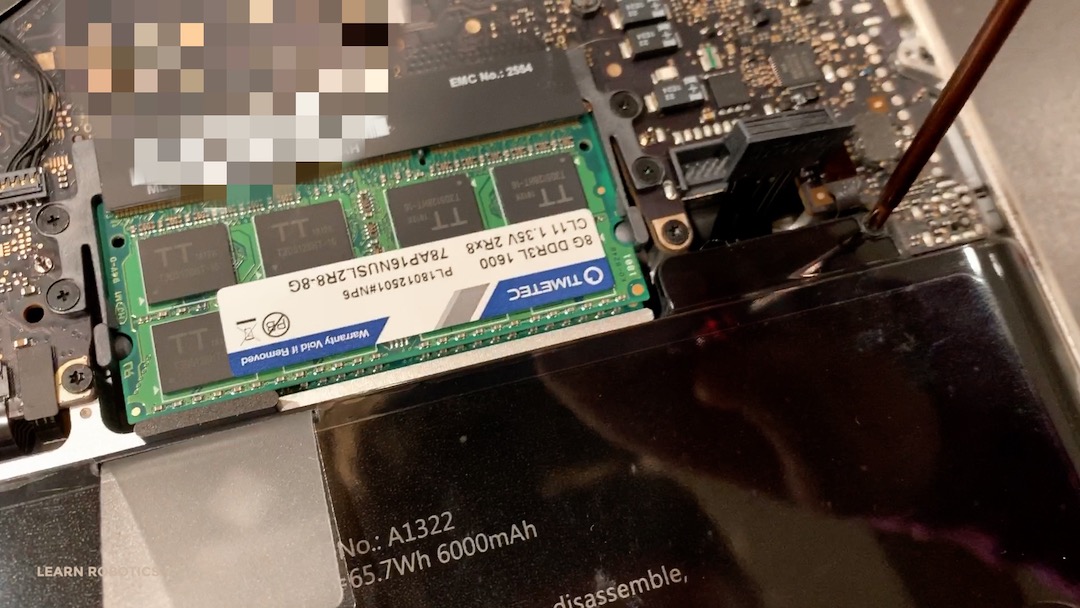 We’ll connect it after we’re done working inside of the case. Line up the battery, and replace the battery screws. I recommend going between both screws and make sure that you have everything lined up. You can also perform a final tightening to be sure the battery is secure. 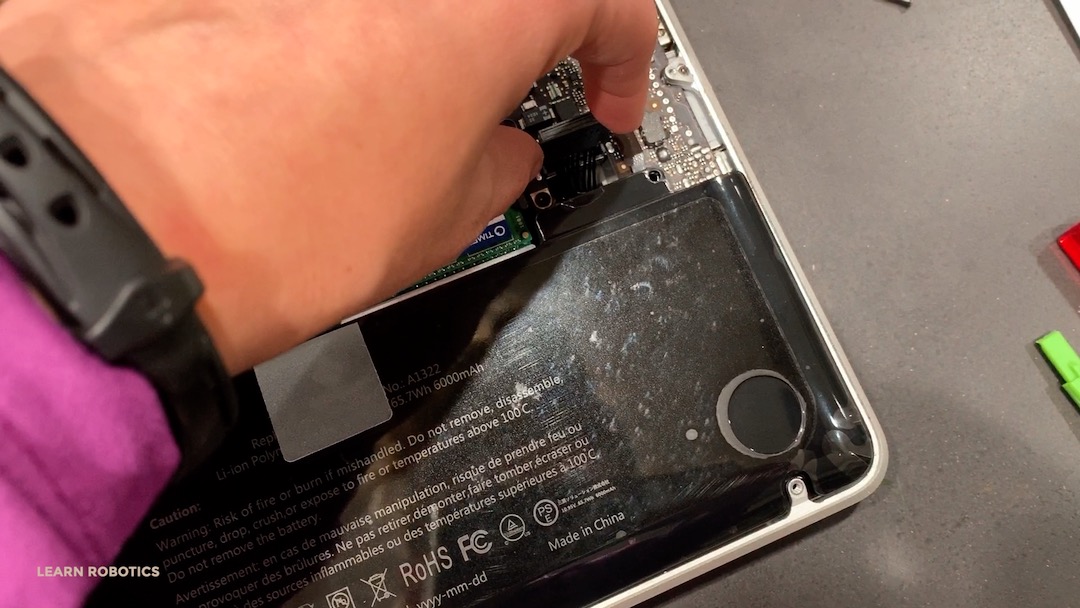 Lastly, reattach the battery connector to the mainboard, and then close up the case.

3. Reattach the Back Cover

Grab the back cover and align it over the computer. The goal is to make sure the seams are flush and everything is aligned nicely. Connect the cover using the screws that you aligned from Step 1. 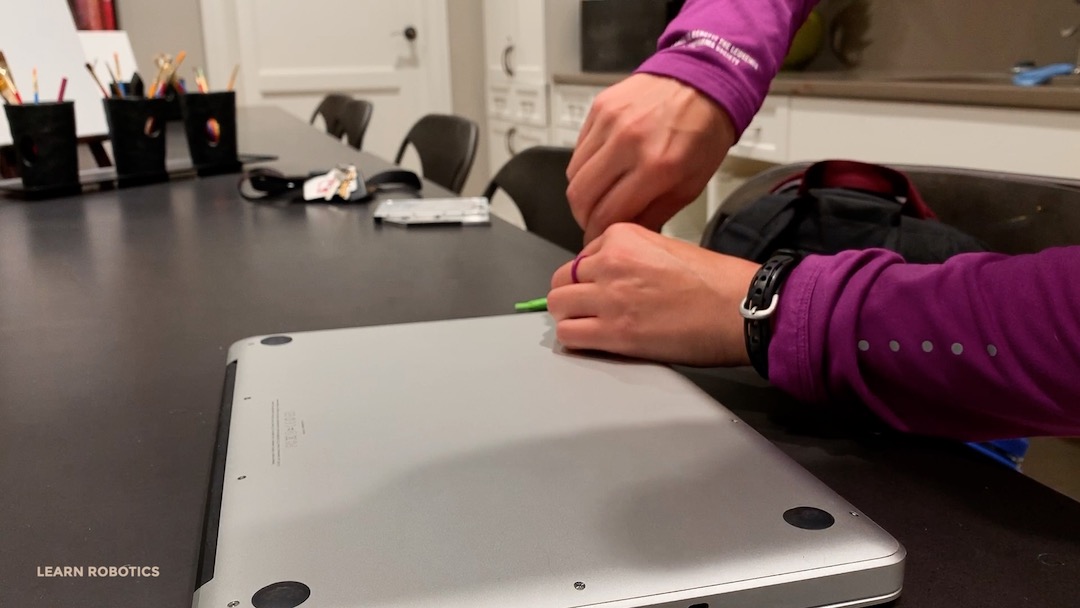 Once you’re finished, flip the computer back upright and press the power button.

If everything goes well, you’ll see the main boot screen. Give it some time to boot up, and then check the battery percentage. You can run a System Report by going to Apple > About This Mac > System Report. Then open the Power tab on the left. 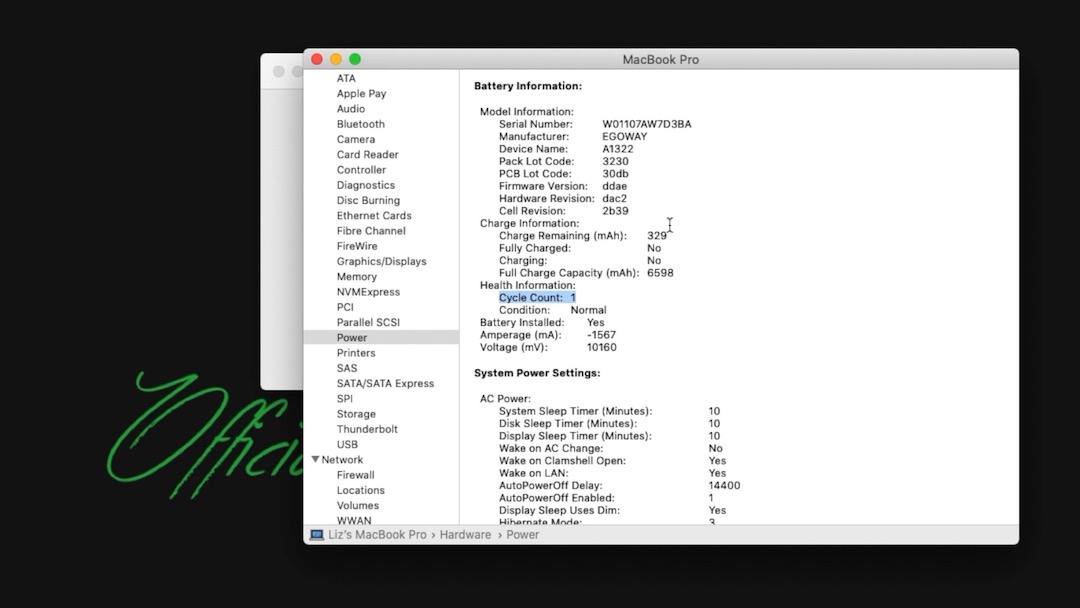 My computer shows the new EGOWAY battery with a Cycle Count of 1.

This is what you want to see because it shows that the system recognizes that it has a brand new battery. Also, if you had the “Replace Soon” warning, that should be gone, and the Battery Condition should be set to Normal.

Battery Conditioning and Calibration for a MacBook Pro

I highly recommend going through a few conditioning cycles for your new battery. Essentially what you want to do is drain the battery down to single digits and then let it charge for 12 hours or until it’s at 100%.

Then you’re going to want to unplug your computer from the charger and drain it down to single digits again. Repeat this process three or four more times. You can check with the manufacturer of your battery for more specific instructions on how to perform the conditioning and calibration.

Don’t forget to Recycle your old Battery! You can visit your local BestBuy to drop off old batteries or use 1800recycling.com to find a battery recycling center near you.

Did you try this upgrade? Let me know how it went. And, if you have any questions, let me know in the comments section below.

Liz MillerLiz is the Founder of Learn Robotics. She holds a B.S. in Robotics Engineering from WPI. Liz has a multitude of robotics experiences ranging from being a Robotics Researcher at UPenn, Instructor at MIT, and Automation Engineer for United Technologies. Liz writes technical tutorials and creates automation courses that anyone can follow. Her tips and tricks help engineers grow their careers. Liz has authored over 150 pieces of unique content on this site. You can support her work here. Learn more about Learn Robotics on our About Us page.
Posted in:
Repair Projects