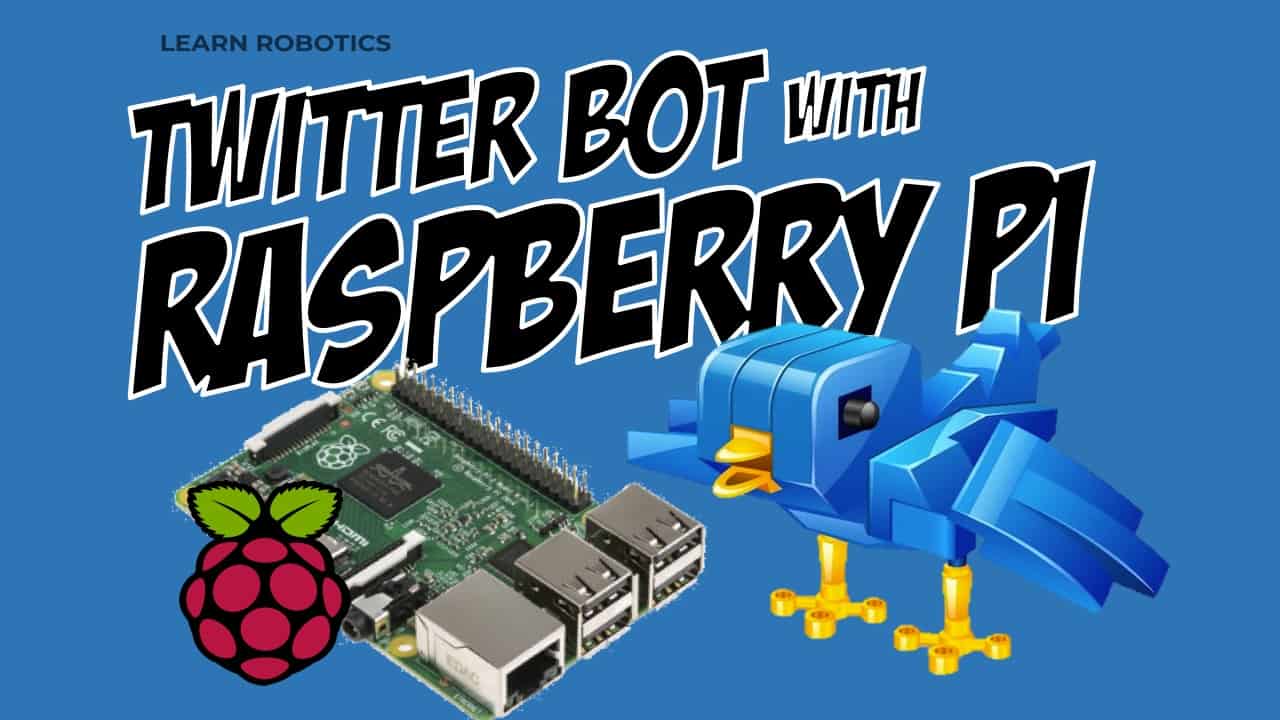 Did you know that Twitter is filled with over 15% bots? Pretty crazy, right?!

While you can create this project without a Raspberry Pi, I wanted to have the bot running 24/7 without using resources on my main computer. Ready to get started?!

The first thing we need is a Twitter account. If you don’t have one already, now is a great time to make one. Also, make sure that you link your phone number to the account because it is needed in the next step.

Once you have a twitter account with phone number linked, it’s time to create a Twitter app. To make a Twitter app first go to the Twitter’s Developer site. If you still haven’t linked your phone number, the site will will ask you to add it now. 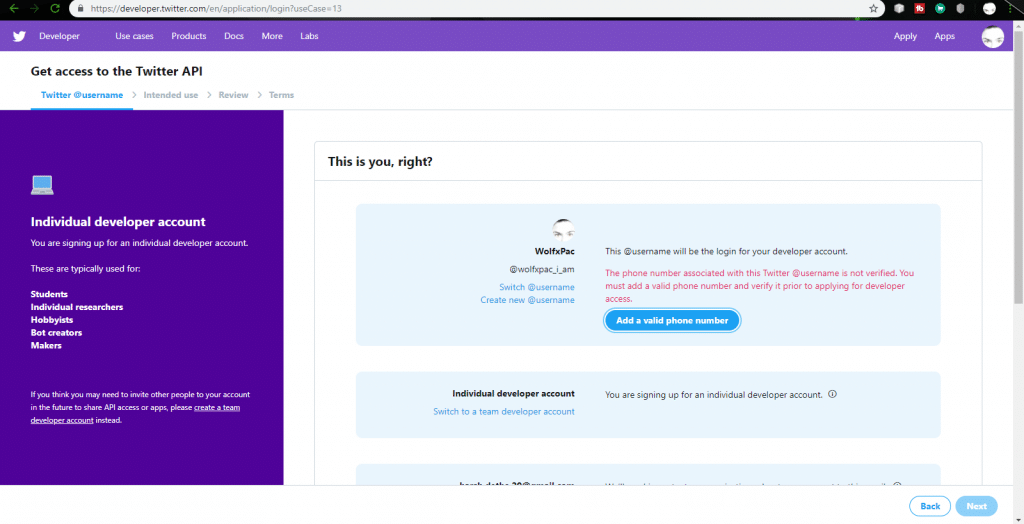 Next, click on “Create an app”. This will take you to an application form, where you have to fill in details. Make sure you fill in real information, and submit the application. It might take a few hours or a couple of days for your application to get approved. 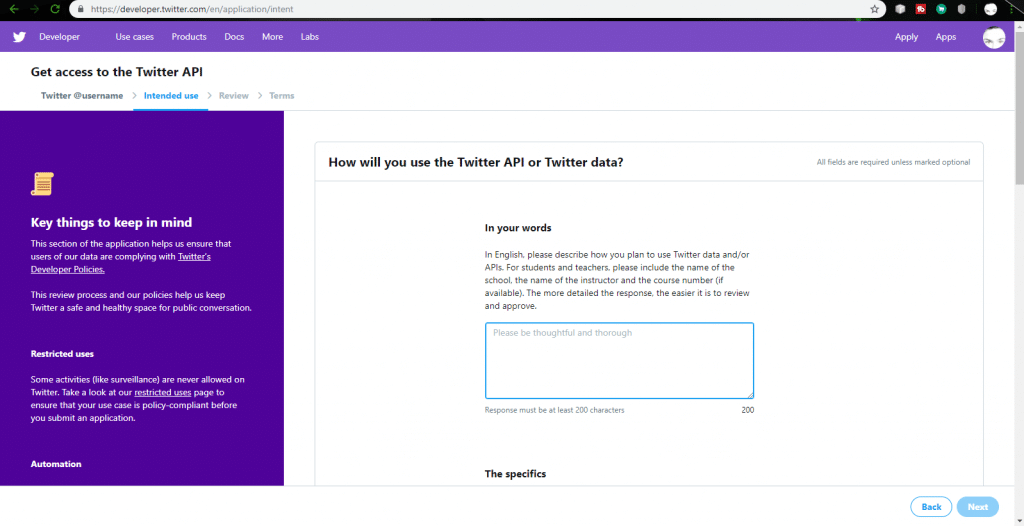 After your account is reviewed, you can create an app. Give it a name, and describe your app. Make sure you enter a URL in the field. If you don’t have a website, just add a valid URL. 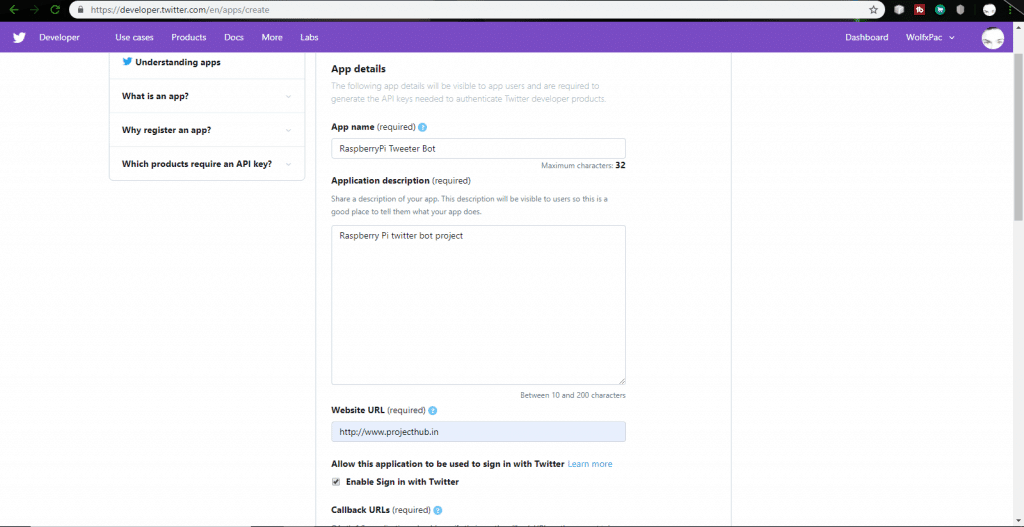 The app will not be created if you leave the URL block empty.  Also check the “Enable Sign in with Twitter” option. After the information is filled in, submit form, and you will be redirected to your application.
Here you will see three tabs, click on “Permissions” and select “Read, write and direct messages” and save it. 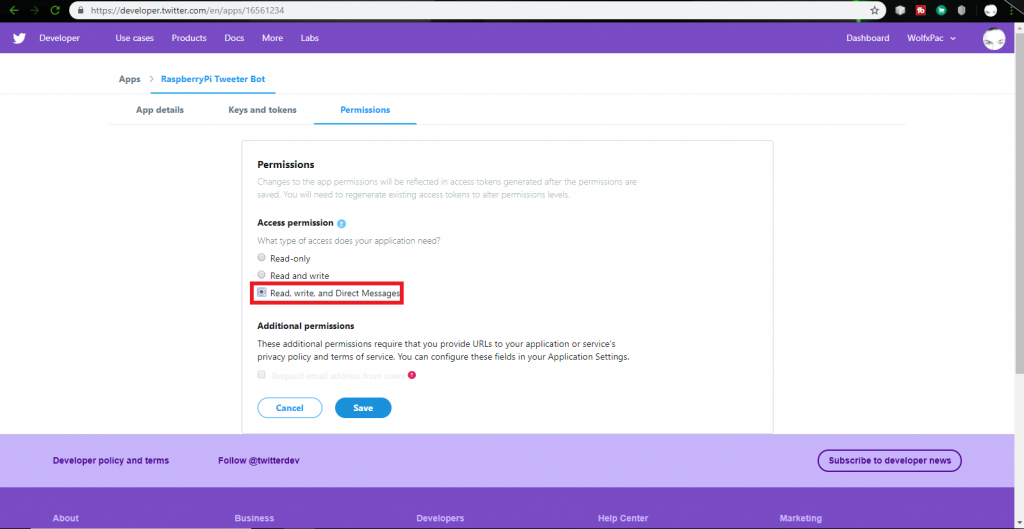 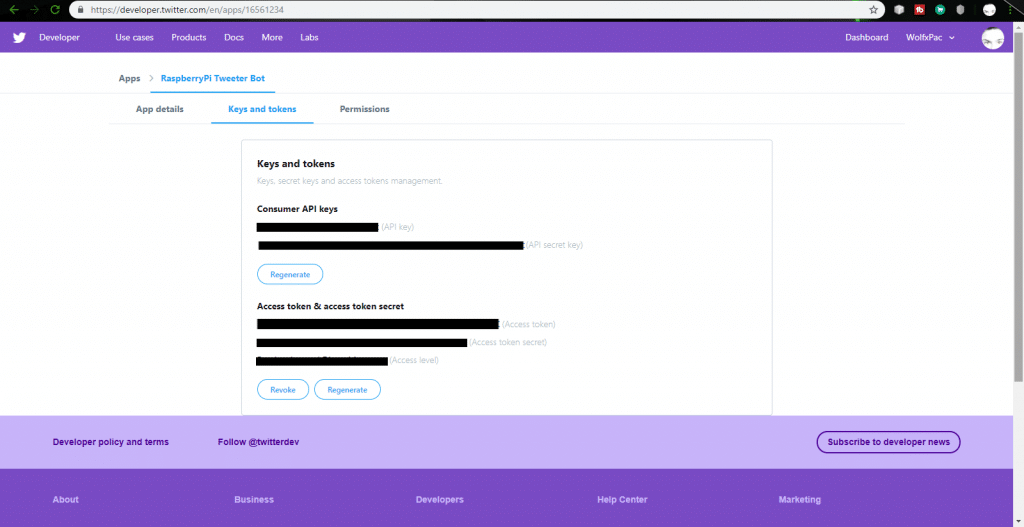 Now that you have tokens for the Twitter API, you’ll need to setup the Raspberry Pi. If you are new to Raspberry Pi, here are a couple of resources to get you started:

I recommend checking those out before continuing with this project.

Setting Up the Raspberry Pi

First power up the Raspberry Pi and open terminal. Next enter the following commands one by one:

These commands will update your Raspberry Pi. Make sure you have an active Internet connection.
Next we want to install Tweepy, a Python library for the Twitter API. This can be installed using pip command.

Above command will download and install Tweepy on the Pi. Now we can start writing the code. Open a text editor or start nano editor through the terminal.

We start by importing the packages required for the code.

First, we import packages that will be used in the code. The package, tweepy, is imported as tp which will be used to connect and control our Twitter account . OS and time are preinstalled packages.

In place of the hash you have to enter your keys. Replace the 'your-xxxx' with your account credentials. We saved the keys into variables so we can use them later to authenticate the Twitter login.
Now we have to authenticate our credentials so our bot can login to our account.

We use the authhandler function to validate the tokens. Next, we save the validation in a variable called, api. This is used for actions such tweeting/retweeting, liking, etc. Now we can start using the API to interact with our account.

We can use the me() function to fetch user data and print it to the terminal. The code, user.name and user.location, prints our username and location. Use this code to verify that the script is working, and the connection is established.

Now, let’s write some code that will follow everyone that is following you.

Now let’s do something a little more complicated. Using tweepy’s search function we can search for keywords/hashtags on Twitter and favorite and retweet the post.

Let’s examine this code further in a quick code walk-through.

First we save some keywords. These are the words you want to look for in a tweet, I used arduino, raspberrypi, esp8266 and learnrobotics. You can use any words you want. Tweepy will search for tweets with these words. In the next line we have a for loop where we search the tag in the function Cursor(). The result_type can either be “popular”, “recent” or “mixes”. The phrase lang="en" will only search for tweets that are in English.

Furthermore, let’s look at the code, .items(). Here the item is empty but you can provide a parameter. (For example item(10)). The bot will only select 10 tweets with this code. If you leave it empty, it will make the search longer, and all the tweets with these keywords will be selected.

There is another try block inside the for loop. First, the tweet is “favorited” using the favorite() function. Then the retweet() function retweets the tweet on your account. Finally, sleep(60) pauses the loop for 60 seconds before selecting next tweet. You can increase or decrease the time in seconds. I recommend using a delay greater than 60 seconds because Twitter might disable your account for spamming.

Finally, there is an except block. This block will throw an exception or warning if there is an error with the tweets. That’s all for the code, now you can save the file as tweetbot.py and run the code through terminal using the following command:

To stop the execution, just close the terminal window. I added a copy of my code, below, that you can use as a starting point. Just enter your tokens/keys, and you are good to go.

In conclusion, Twitter bots aren’t too difficult to make once you have a straightforward procedure to follow. I encourage you to give this project a try! Make your own twitter bots and test the wide range of functions Tweepy provides. If you have any questions, feel free to ask in the comment section, below.

And finally, if you are interested in robotics, be sure to check out my ebook, Mini WiFi robot!

Harsh DetheElectronic hobbyist, Technology enthusiast, I like to hack, make, and create. You can find my tutorials on ProjectHub.
Posted in:
Robotics Tutorials
Tagged:
programming, Python, Raspberry Pi, Twitter