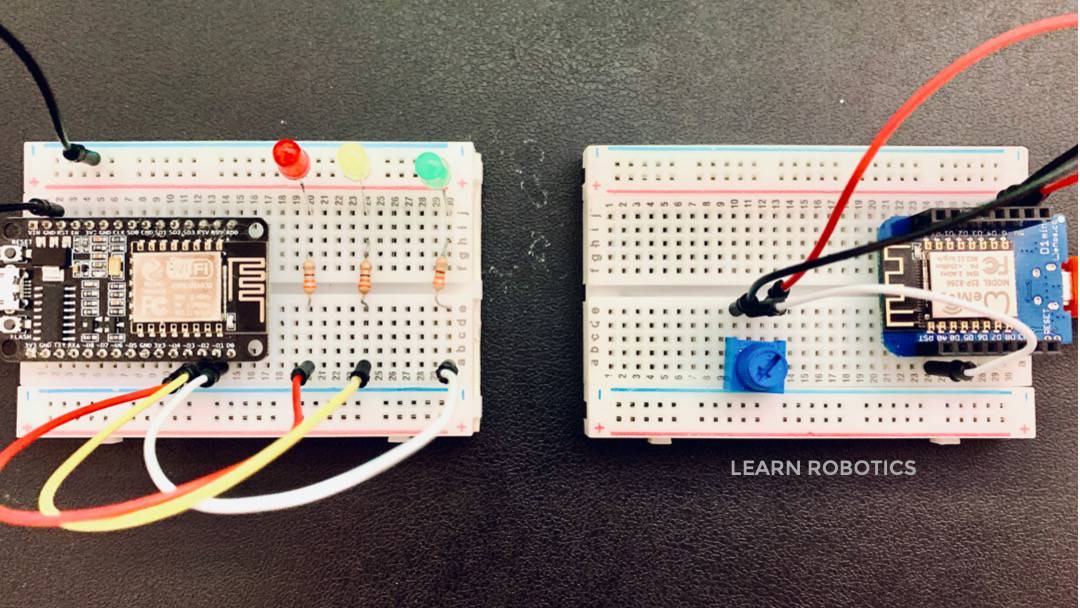 In this article, learn how to parse JSON data with Arduino for IoT, IIoT, and Home Automation projects. We’ll start by connecting our wifi-enabled chip (ESP8266) to the Internet and then pointing it to the URL where the JSON file is stored. Then, we’ll use the ArduinoJson library to parse the JSON file into readable variables. Lastly, we’ll make checks against the variables to control outputs on our ESP8266.

JSON data is a lot easier to work with using Python, but if you’re creating an IoT device using Arduino, then this methodology comes in handy. Expect to spend an hour or so configuring this project.

This project is more advanced, so I recommend brushing up on the following topics if you’re new to Arduino and IoT.

Related: If you’re 100% new to Arduino, then enroll in my Arduino for Beginners course to get up to speed on building your prototypes from scratch.

The goal of this project is to create a secondary IoT device that receives data. If you’ve followed along with previous dweet.io tutorials, you’ll notice we spend a lot of time publishing data to a webpage. This tutorial expands on that project by creating a second device that fetches and interprets the published data.

If you’re looking to create your custom automation systems, then this can be very powerful because you’re essentially connecting two separate devices using the Internet.

Here’s a diagram of what the final solution looks like. 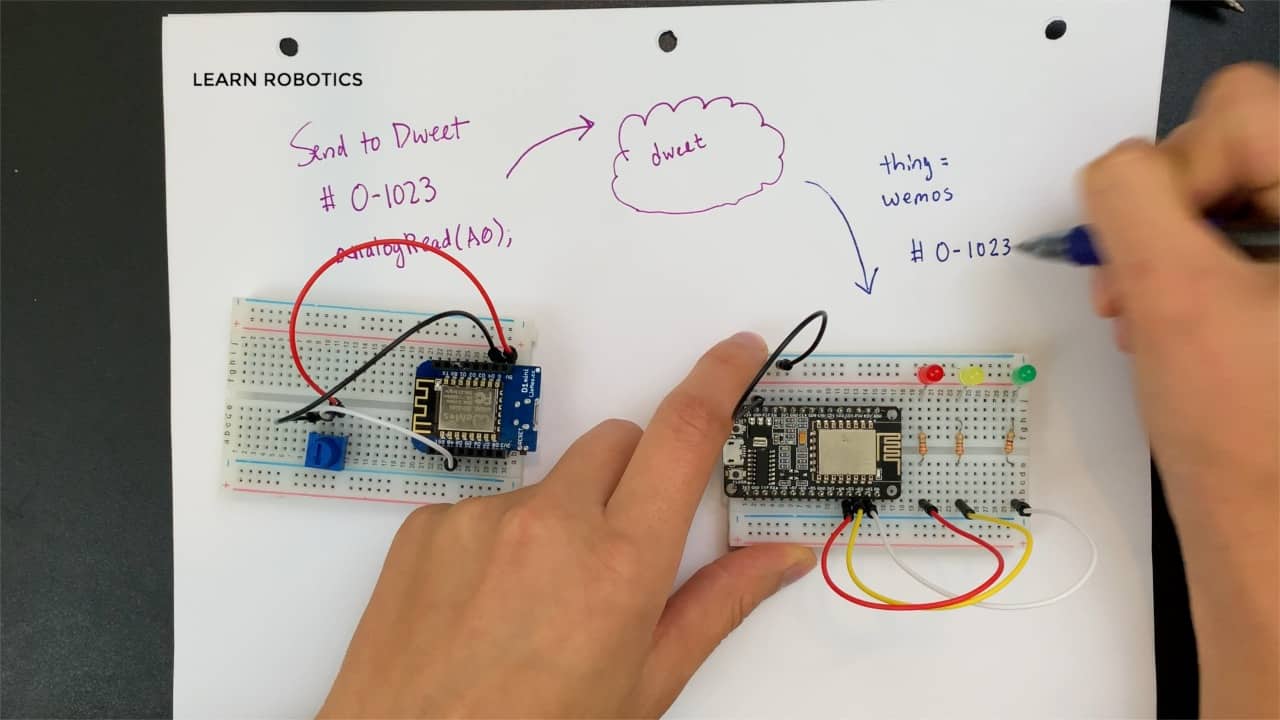 Now, let’s walk through the steps to get this working.

Materials for this Project

If you plan on using one device to publish data and another device to receive data, then you’ll need two separate ESP8266 controllers.

We’ll be demonstrating the project by sending data to the dweet.io website using a Wemos D1 Mini and then receiving data from that URL using a second device (NodeMCU). Lastly, we’ll parse the JSON file and use the data to control our LEDs.

Wire a potentiometer to the Wemos D1 Mini. Then, wire three LEDs to the NodeMCU. Here are some fritzing diagrams for your reference. 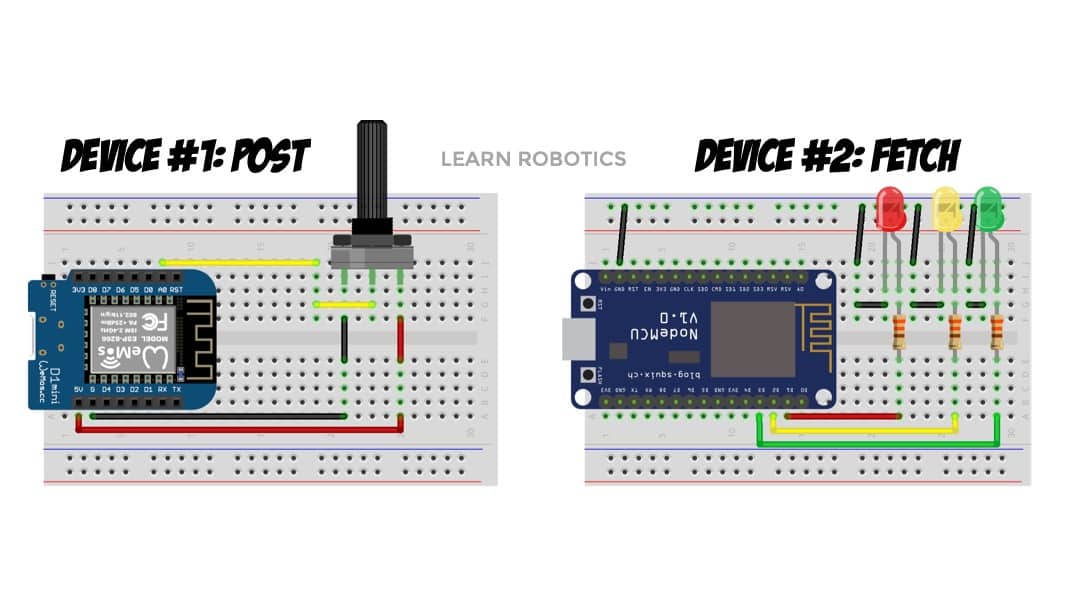 Once your devices are wired, write and upload code to the Wemos D1 Mini to publish potentiometer data to dweet.io. We have an example of this in our Special Topics Robotics Course and this article. Then move on to the next step.

To parse JSON files using Arduino, you’ll need to install the ArduinoJson library. Open up the Arduino IDE and go to Sketch > Include Library > Manage Libraries. Then search for ArduinoJson by Benoit Blanchon. Click the Install button. 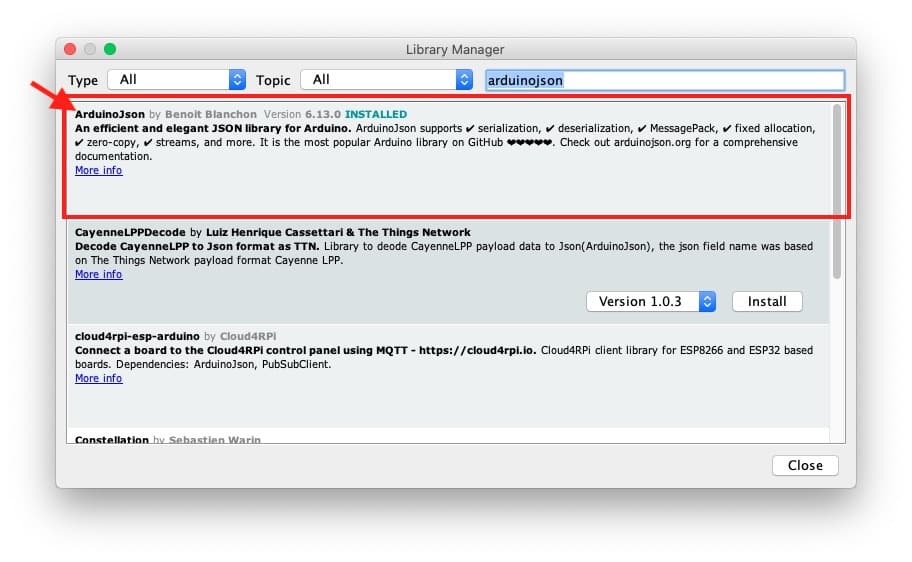 Then, include the header file at the top of your Arduino sketch.
#include <ArduinoJson.h>

Then, set up the sketch as you would normally. Define any global variables. Initialize the Serial Monitor at 115200 baud, and define any pin modes in the method. You’ll also need to connect the controller to the Internet.

Once you have the code written, it’s time to add some logic to fetch and parse JSON Data.

Are you more of a visual learner? Sign up for the Special Topics Robotics Course to gain access to the video lesson of this project!

The first step is to view the raw JSON data hosted on dweet.io. Regardless of whether you publish this data from a device or use an existing device, it’s important to understand how the data is formatted so that we can receive it in a way that makes sense.

Open up your browser and go to dweet.io/see. Then click on the device name to see the current readings.

Now, we’re ready to use ArduinoJson to fetch this data. Copy and paste the JSON information from dweet.io into the ArduinoJson V6 Assistant tool. This will give you the necessary notation to format and parse the JSON file correctly using the ArduinoJson library.

Once you have the data, you can do whatever you’d like with it. Essentially, you have a local variable that can be used to toggle LEDs or local outputs based on conditions.

Let’s use the value of the potentiometer position to turn on the corresponding LED based on the following conditions.

Here’s some example code that you can use to set up your device.

And that’s it! You can choose to update the local variable in real-time, store data into an array, create a CSV, or whatever else makes sense for your application. Once you have the data, the possibilities are endless!

Next Steps for Further Learning

In this tutorial, we learned how to parse a JSON file using Arduino. The data was stored on the dweet.io website, which we connected to and performed a GET HTTP request. Once we removed the headers and allocated the JSON file, we could use the ArduinoJson library to parse the key-value pairs and set a local variable. In turn, we were able to use this variable to check against a set of conditions and turn on a corresponding LED.

You can use this methodology to configure a network of IoT devices. These devices can automatically connect to a webpage, push and pull data, and make decisions based on the current values. As a result, you can unlock powerful, real-time metrics for applications in Industrial and Home Automation.

Have a question? Be sure to review Episode 8 of the Special Topics Robotics Course. And, lastly, if this tutorial helped you in any way, consider sending me a tip.

If you enjoyed this tutorial, be sure to share it with a friend!

Liz MillerLiz is the Founder of Learn Robotics. She holds a B.S. in Robotics Engineering from WPI. Liz has a multitude of robotics experiences ranging from being a Robotics Researcher at UPenn, Instructor at MIT, and Automation Engineer for United Technologies. Liz writes technical tutorials and creates automation courses that anyone can follow. Her tips and tricks help engineers grow their careers. Liz has authored over 150 pieces of unique content on this site. You can support her work here. Learn more about Learn Robotics on our About Us page.
Posted in:
Internet of Things, Premium
Tagged:
Arduino, dweet.io, IoT, JSON, NodeMCU, Wemos D1 Mini