If you’re anything like me, then you enjoy building mobile robots. As I’m sure you’re aware, mobile robots are comprised of 5 parts: chassis, motors, controllers, sensors, and power. To cover three of these groups, you’ll need to properly wire the motors to the controllers (motor and master) and then add your power supply. It’s easy to wire up a motor controller, but it can be challenging to power it for mobile applications. These examples show wiring diagrams for a pair of 3-6V DC motors powered by a 7.4V battery pack (2X 18650 batteries). Pick your controllers from the list, and use the wiring diagrams to complete your project. For convenience, you can also bookmark this page, and visit it the next time you’re building a mobile robot.

In this article, I’ve compiled the most popular or common configurations for connecting Motor Controllers L298N (Datasheet) and L293D (Datasheet) to the Raspberry Pi and Arduino (Uno, Nano, NodeMCU). I compiled this guide to keep all the resources and wiring diagrams in one place.

For easy navigation, you can click the links below to find the wiring diagram on this page.

For this application, you’ll connect the L298N signal pins as follows: The L293D is wired similarly. You’ll need to use a breadboard to wire up the L293D. Here are the signal pins between the controllers.

You can power your Raspberry Pi using a 5V 2A battery pack. Lastly, you can use the TB6612 with the Raspberry Pi if you want to use an external DC Motor power source. Here’s how it’s wired: If you’re not using Raspberry Pi, you can check out the Arduino Motor Controller diagrams for your project. I’ve compiled drawings for Arduino Uno, Nano, and NodeMCU.

If you’d rather use Arduino, you can check out this set of common Arduino Motor Controller wiring diagrams. To learn how to build a mobile robot using Arduino, check out this popular tutorial. You can also opt into our Robotics eCourse to learn more about mobile robots, programming, electronics, and compete in autonomous challenges. Enroll in the course here.

The L298N is a pretty common controller used with the Arduino Uno. Connect the signal pins as follows:

Ready to add autonomy to your robot? Learn how to program the L298N motor controller with Arduino in this tutorial.

Here’s the L293D Wiring Diagram for Arduino Uno. The signal pins are connected as follows:

Then, attach the motor leads to the L293D, followed by the power between Arduino, motor controller, and battery pack. Next, attach the motor leads to the side pins on the L298N. Then, wire up the power and ground leads to the breadboard. Be sure to connect power & ground for the nano, motor controller, and battery pack. 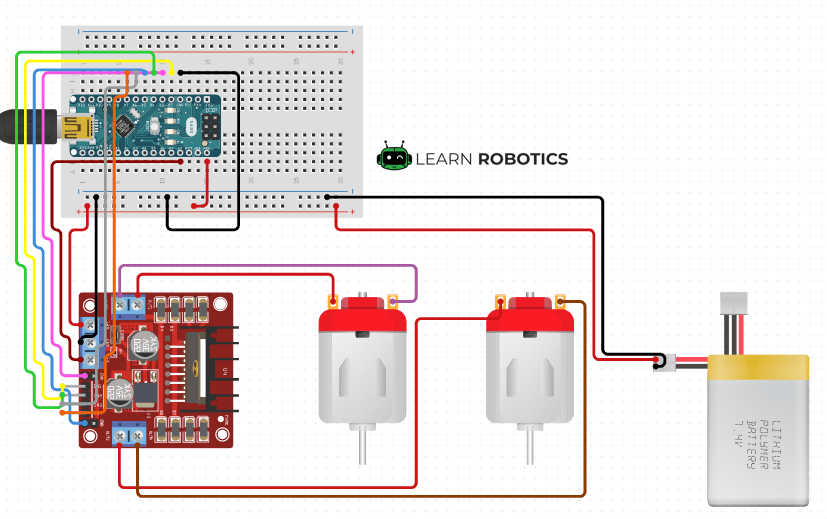 Here’s how to wire the Arduino Nano to an L293D motor controller. Connect the signal pins as follows. Then, wire the power, ground, and motor leads together using the diagram, below. 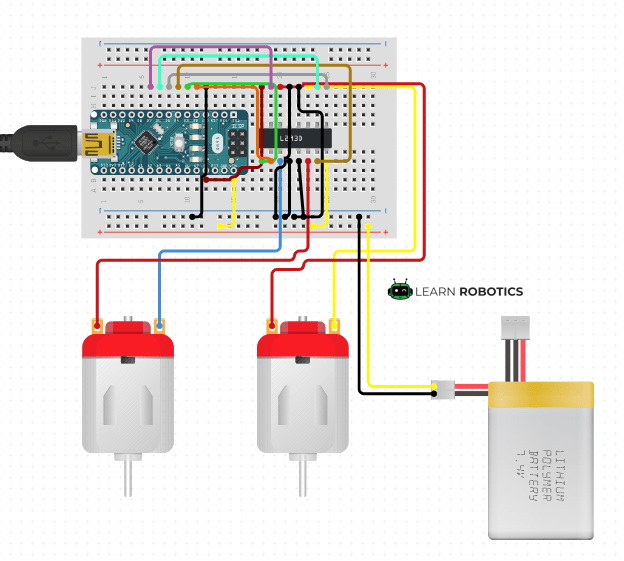 You can also use an L293D with your NodeMCU. Here’s how to connect the signal pins: Lastly, you’ll want to verify your wiring and keep the controller powered off while downloading code. It’s good practice to add in a power switch off the battery pack to make wiring easier. The cool thing about these configurations, is once you have tried a few of them, you can make a mobile robot out of just about anything! Some projects include Tiny Robot Cars, Robotic Tanks, Robot Cars, and more.

Have you built any of these configurations?

I hope you find this article useful for your next mobile robot project! Tag us in your robotics projects on Facebook and Instagram!

Then, let me know what you think of this post in the comments section below. And, if you have a suggestion or correction for any of these wiring diagrams, be sure to include that in your comment as well.

Like these articles? Support the work we do by enrolling in an online course or signing up for a monthly membership. Our site is 100% powered on our growing community, so thank you for your continued support!

Liz MillerLiz is the Founder of Learn Robotics. She holds a B.S. in Robotics Engineering from WPI. Liz has a multitude of robotics experiences ranging from being a Robotics Researcher at UPenn, Instructor at MIT, and Automation Engineer for United Technologies. Liz writes technical tutorials and creates automation courses that anyone can follow. Her tips and tricks help engineers grow their careers. Liz has authored over 150 pieces of unique content on this site. You can support her work here. Learn more about Learn Robotics on our About Us page.
Posted in:
Premium, Robotics Tutorials
Tagged:
Arduino, circuits, L293D, L298N, mobile robot, Raspberry Pi, Wifi