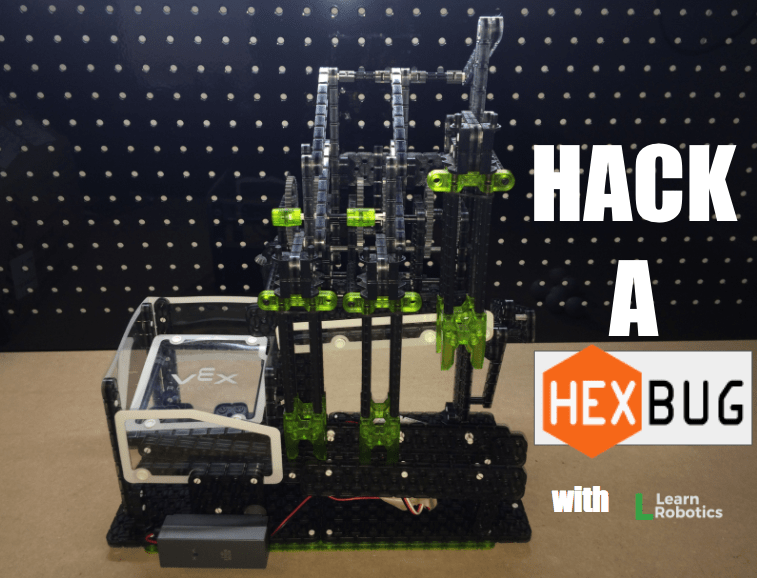 I had this really cool idea to make the VEX Pick & Drop kit “automated” by incorporating a motor on the crank shaft.

Rather than manually control the arm movements, we’ll program an Arduino Nano (aff. link) to make the system move.

If you haven’t already assembled your kit, follow these instructions to put it together. Then, when you’re finished, come back to this tutorial, and add in the Arduino control.

Before we get started, it’s recommended you have a fundamental understanding of Arduino programming and how to configure a breadboard for prototyping.

If you’re confident in both of those subjects, let’s continue!

Step-by-Step Guide to Add Arduino Control to your HEXBUG

We’re going to replace the manual crank with a motor controlled by the Arduino. Disassemble the crank mechanism on the HEXBUG. 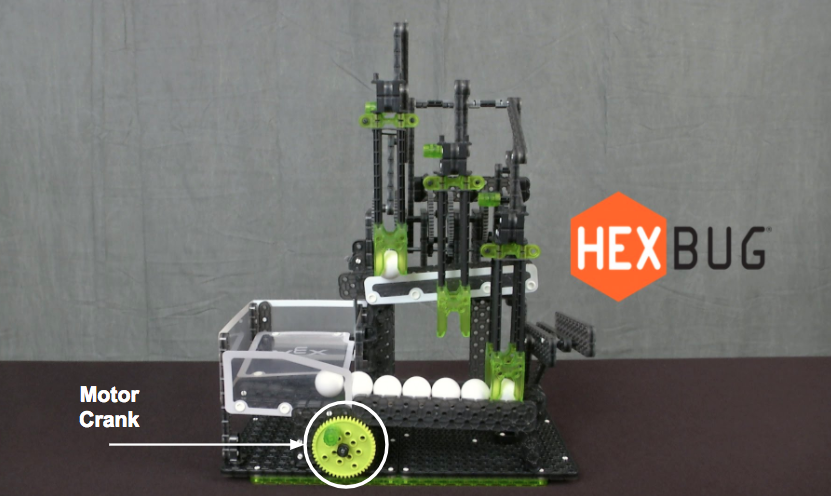 Add a VEX motor to control the rotating shaft

Attach the VEX Motor to the side of the Hexbug using two motor screws. Run a long, square shaft through the center of the assembly. Be sure that the bevel gear lines up with the vertical shaft. 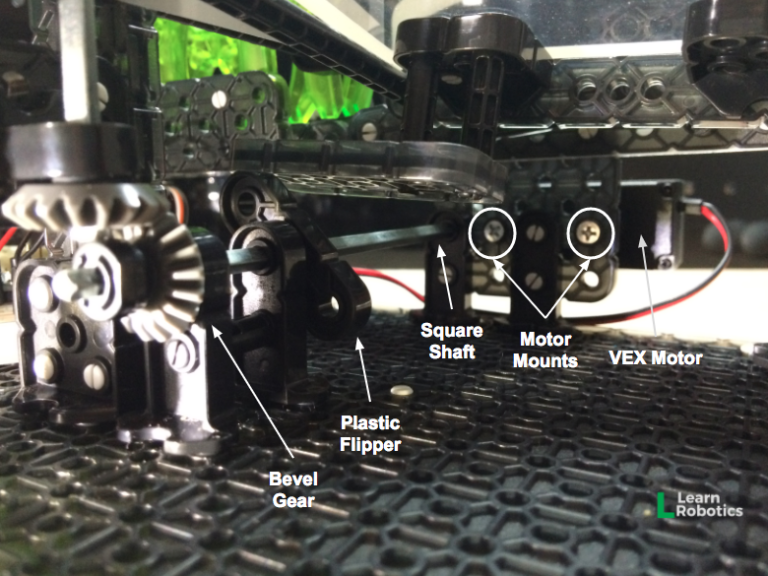 Note that the motor not only controls the 3 claws, but it also dispenses balls from the chute to the pick up point. There is a plastic “flipper” that rotates and moves the dispenser door. Align the ball flipper so that it’s center with the dispenser door.

Connect the motor to your Arduino

Here’s a simple wiring diagram for our setup

Now that we have everything configured, we are going to step into the programming of this motor. First, download the Arduino IDE on your computer. Then, follow along with these programming steps.

First, we’ll start off this sketch with a quick comment at the top of the code. Comments start and end with a forward-slash (/) and an asterisk (*).

Then, define your motor as a Global Variable. Remember, the motor is plugged into digital pin 3 on the Arduino Nano. Therefore, we will set the variable, motor equal to 3. “int” is the variable type of the declaration. It tells the controller that motor is a whole number.

Next, add your motor to the setup() method as an OUTPUT. You must do this for all devices connected to the Arduino.

Create a new method, called runMotor(), that, you guessed it, runs the motor. We’re going to control the speed of the motor and how long the motor is running by providing two input parameters, speedM and timeM, respectively.

NOTE: You will need to declare trigger in your list of global variables (under your motor declaration).

Call the method in loop()

Call the runMotors() method in your loop() method. The loop() method runs through each line of code sequentially from top to bottom and then repeats forever. (So as soon as it’s done executing the last line, the first line is executed, and so-on.)

Remember to provide a speed and duration for the runMotors() method. Time is always in milliseconds (1000 milliseconds = 1 second).

Finally, save, Compile, and Upload your code. Click the “check” in the top left corner to compile. Then press the “arrow” to upload the code to your Arduino.

If everything is working properly, then you should see the motor turn on, the square shaft spinning, and the claws picking and dropping the ping-pong balls. If not, then go back through the tutorial and do some troubleshooting. If you have a question, leave it below, and I’ll be sure to provide you some feedback!

I hope you enjoyed this tutorial on how to Hack a Hexbug VEX Pick and Drop Ball Kit. If you liked this tutorial, be sure to check out my other articles using Arduino.

Liz MillerLiz is the Founder of Learn Robotics. She holds a B.S. in Robotics Engineering from WPI. Liz has a multitude of robotics experiences ranging from being a Robotics Researcher at UPenn, Instructor at MIT, and Automation Engineer for United Technologies. Liz writes technical tutorials and creates automation courses that anyone can follow. Her tips and tricks help engineers grow their careers. Liz has authored over 150 pieces of unique content on this site. You can support her work here. Learn more about Learn Robotics on our About Us page.
Posted in:
Robotics Tutorials
Tagged:
Arduino, hacking, Hexbug