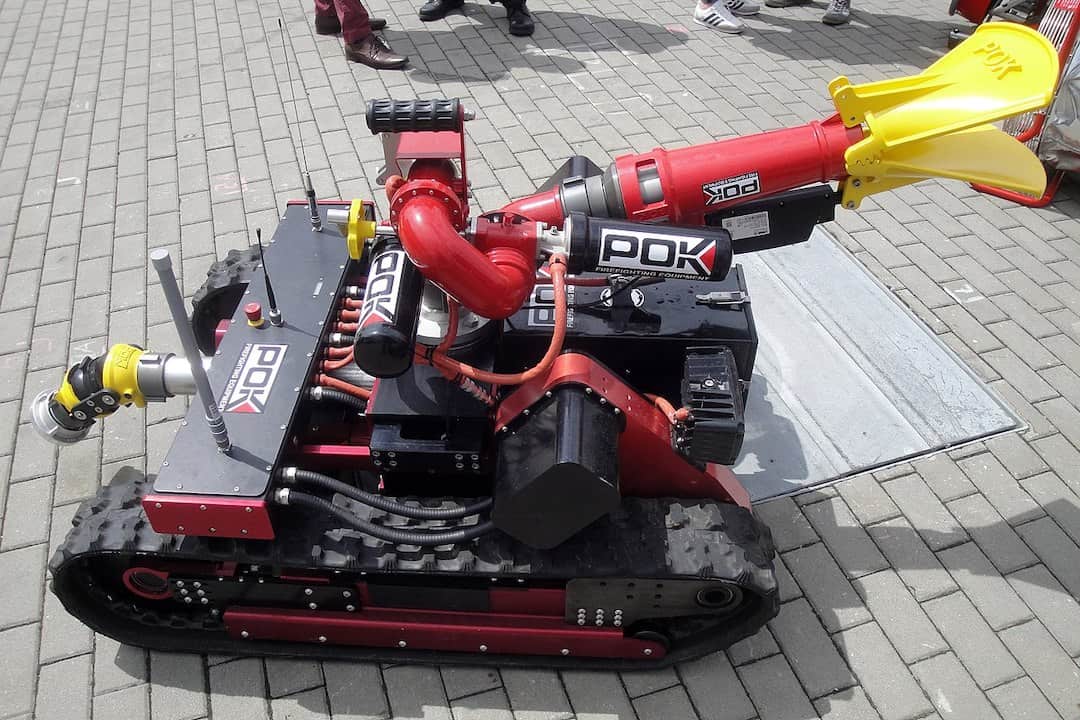 Did you know that as of 2018, there are over 1.2 million people who are firefighters? Fire departments respond to one call every 23 seconds in the United States. Crazy, right?

I don’t need to tell you that firefighting is a dangerous job. However, I did want to share are some ideas for making a fire extinguishing robot. When fires become out of control, it’s optimal to send in firefighter robots to extinguish the flames.

So, if you’ve ever considered tackling this problem with your robotics skills, you can use this guide to get started.

“…Robots have proven to be an important firefighting tool. ‘It’s 100 percent the future.'”Michael Howe, President of Howe and Howe Technologies

To build a fire fighting robot using Arduino, you’ll need a background in building mobile robots and a kit of parts.

While that might sound overwhelming, if you work on each step sequentially and slowly integrate working subsystems, then you’ll have a good chance of having a working robot.

Here’s a list of parts that are helpful when planning out your fire fighting robot.

As you are mapping out your fire fighting robot design, keep in mind how you want to extinguish the flames (water or a propeller or compressed air).

You’ll also need to consider whether or not your robot will have FPV (first-person view), teleoperated controls, autonomous controls, and mapping features.

For more sophisticated autonomous robots, like the RS1-T3, you may want to consider using ROS and creating object-recognition or flame-targeting algorithms.

Or, you may consider how this robot is going to be used: in real examples or for competitions.

Lastly, the materials you use for a robot battling real fires (like the one above) have to withstand high temperatures. Keep this in mind, as well as environmental factors including dust, smoke, and debris.

You might have landed on this page because you’re preparing to compete in a Fire Fighting Robot competition.

If not, welcome! Building a Fire Fighting robot is a cool (and rewarding) project, nonetheless.

In this section, we will explore three fire fighting robot designs using Arduino.

The project files, code, and reference materials are linked to the original project page so that you can try these designs out yourself.

This article is meant to provide you with some ideas just in case you are new to robotics and need a starting point.

This fire fighting mobile robot design uses an Arduino Uno and combines three flame sensors, a 5V water pump, and a servo to detect and extinguish a small flame.

Similarly to building an LDR array, you’ll place three flame sensors in the front of the robot. (One on the left, middle, and right.)

Then, you’ll check to see which side detects the fire (HIGH-active), and move towards that direction. Once you’re close to the flame, you can use the mini pump to spray the flame with some water.

The downside to using water, is that hobby electronics and water do not mix. Testing this robot could be very messy unless you place the electronics in a waterproof case.

Materials needed to build a fire fighting robot with Arduino:

This project uses a flame module, pump, and Tic Tac box to extinguish flames with water. The chassis is 3D printed and modular, so it can be customized based on your needs.

You can also make a wheel or a treaded version of this robot. Check out this design if you want to incorporate CAD modeling and 3D printing with your design.

However, be aware that the temperature of the dullest flame is 525°C. The melting point of ABS is around 230°C. This robot design may not be suitable for sending robots into extinguishing large areas of fire.

This could be sufficient if you’re competing in a fire fighting competition and only have to extinguish a single lit candle.

This robot is based on the SMARS Rover Chassis and retrofitted with an Adafruit motor shield. Read more about this mini robot fire truck on Thingiverse.

Rather than using water to extinguish flames, the Pokey robot by Michael Shimniok uses a large propeller. The goal of this robot was to navigate a maze (representing a house with rooms) and put out a lit candle. This is very similar to the Trinity Robotics Competition held today.

You can read more about Pokey on the Bot Thoughts blog.

Components you’ll need to build a firefighter robot with a propeller:

For over 27 years, Trinity College (held in Hartford, CT) has hosted the International Fire Fighting Home Robot Competition, which advances robotic technology and knowledge by using robots as an educational tool. 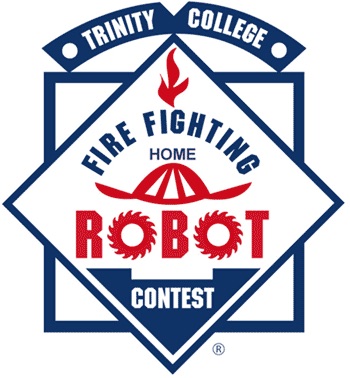 The cool thing about this contest is that the robots are completely autonomous. That means teleoperated control is not allowed.

The goal of this competition is to have the fastest robot that can navigate a maze and extinguish a lit candle.

Learn more about the Trinity Fire Fighting Robot contest here. (And be sure to tell them Learn Robotics sent you!)

In this article, we explored how to build a fire fighting robot and three example designs for fire extinguishing robots.

While there are many different ways to build a firefighting robot (take Trinity College’s 27-years of fire fighting competitions), there are a few key fundamentals to every fire robot.

1. Fire fighting robots must be designed for a specific purpose.

If the goal is to extinguish a lit candle, then you can get away with fewer design considerations than a robot that’s being sent in to extinguish a room engulfed in flames.

2. Fire fighting robots may be autonomous or teleoperated or both.

Depending on how you want to use the robot, it may make sense to have an operator or firefighter control the robot on-scene. Some robots are even sent into dangerous environments to look for people or rescue missions.

3. Good fire fighting robots aid in getting the job done.

As you’re developing ideas for your fire fighting robot, it’s important to remember that robots are there to assist with extinguishing fires. Not add to the commotion.

The best fire fighting robots are exceptionally useful for the tasks they’re designed to do.

Have a tip for building a fire fighting robot? Did you compete in the Trinity Fire Fighting Robot contest? Leave your tips below!

Liz MillerLiz is the Founder of Learn Robotics. She holds a B.S. in Robotics Engineering from WPI. Liz has a multitude of robotics experiences ranging from being a Robotics Researcher at UPenn, Instructor at MIT, and Automation Engineer for United Technologies. Liz writes technical tutorials and creates automation courses that anyone can follow. Her tips and tricks help engineers grow their careers. Liz has authored over 150 pieces of unique content on this site. You can support her work here. Learn more about Learn Robotics on our About Us page.
Posted in:
List of Projects, Robotics Tutorials