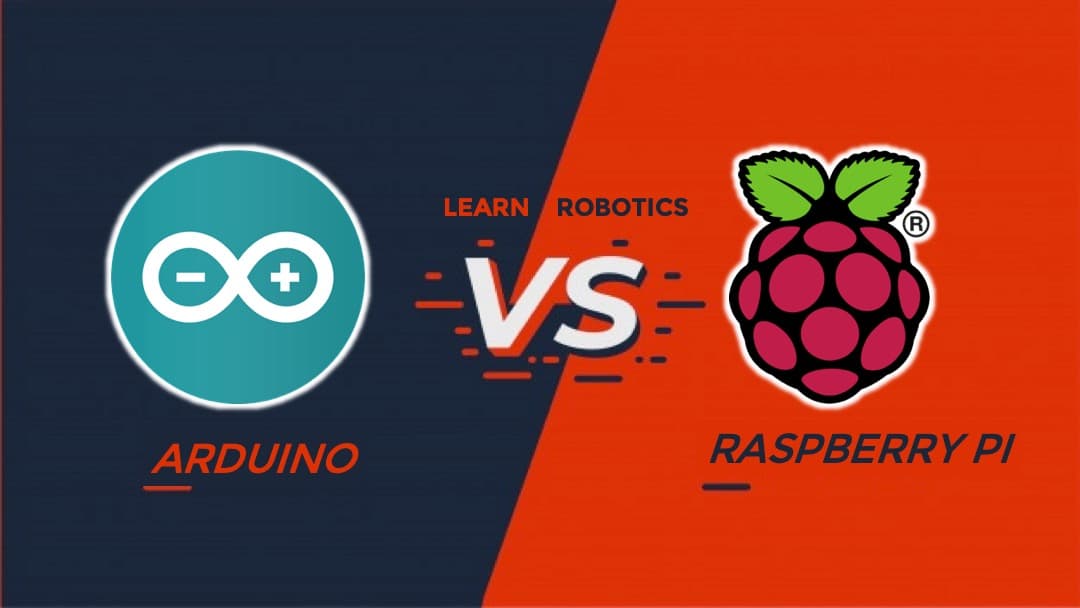 Which controller should you use for your next project: Arduino vs. Raspberry Pi? If you’re struggling to determine whether to use Arduino or Raspberry Pi for a robot, IoT, or electronics prototype, then you’ve come to the right place.

In this article, I’m going to help you figure out which controller you need. By the end of this post, you should be well on your way to building your next project with either the Arduino or Raspberry Pi.

Ready to get started?

Let’s first look at the Arduino and Raspberry Pi.

You can see from the table that the Raspberry Pi has a whole host of additional features in comparison to the Arduino Uno. These features may or may not be required by your project.

If you don’t need the Operating System and features that the Raspberry Pi has to offer, then the Arduino Uno is a more cost-effective option. However, if you need the flexibility of programming in a variety of languages, then choosing the Raspberry Pi makes sense.

Now, let’s look at both the Arduino Uno and Raspberry Pi in depth.

There are many flavors of Arduino and Arduino-compatible boards (Nano, Mega, ESP8266, etc.) However, in this article, we’re going to focus specifically on the Arduino Uno. 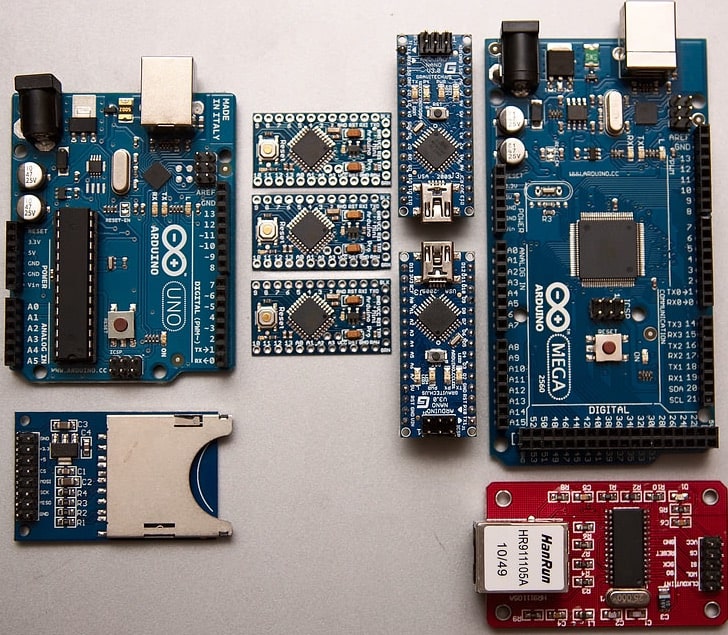 The Arduino Uno is a microcontroller based on the Microchip ATmega328P and is designed to run a single C++ program. It has 20 I/O pins: 6 Analog Inputs and 14 Digital Input/Output pins. It’s easy to prototype because it has built-in headers and a USB port for easy programming.

Besides an affordable cost, the Arduino Uno is very easy to create prototypes with. All you need to do is download the Arduino IDE, create a simple program, and upload it to your board. You don’t have to create a low-level embedded code. This saves time and makes rapid prototyping accessible to anyone.

Also, the Arduino has low power consumption (~50 mA), which makes it a better choice for portable, battery-powered projects.

Why you should use Arduino 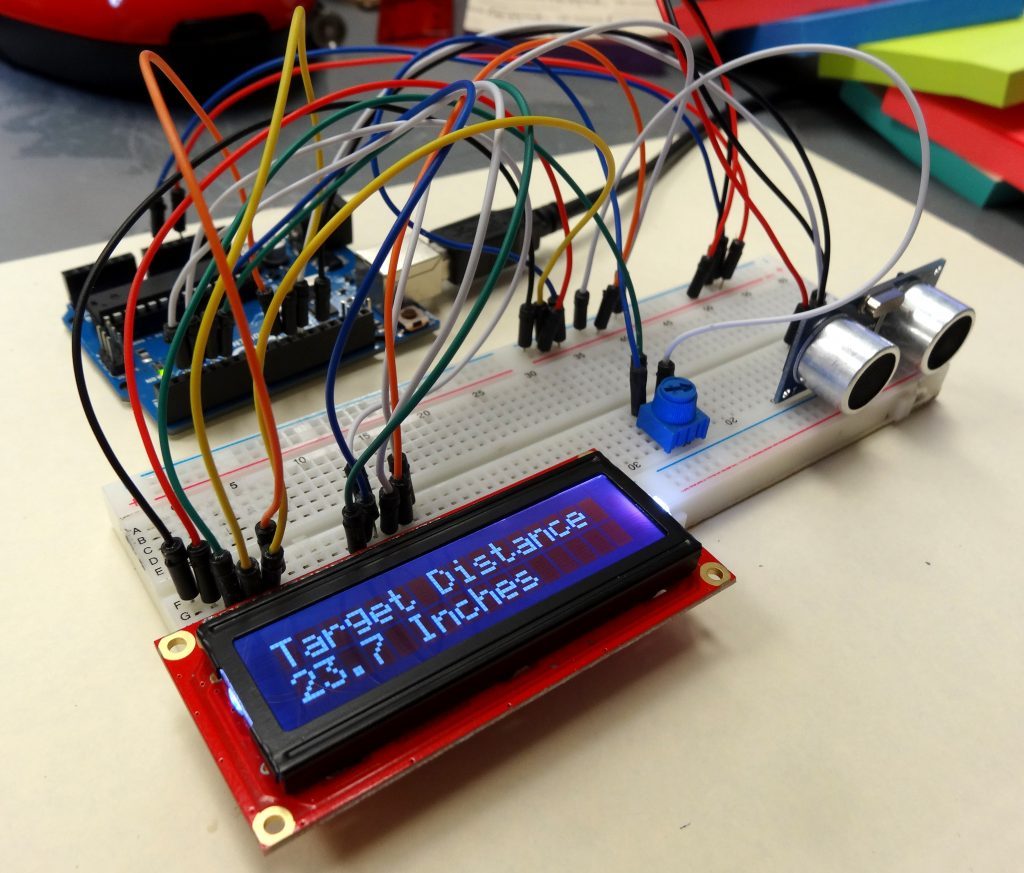 You should use Arduino if you’re looking to create a prototype quickly and for an affordable price. Because Arduino has a small learning curve, it’s a great board for beginners looking to program electronics and robots.

Want to get started with Arduino, Fast?
Then you’ll want to check out my Arduino for Beginners course.

On the other hand, you can get more features and processing power by choosing a Raspberry Pi.

The Raspberry Pi is a single-board computer created by the Raspberry Pi Foundation. It has a myriad of features including 4X USB ports, built-in LAN, WiFi, Bluetooth, an SD card reader, HDMI port, and more! It also has half-a-million times more RAM than the Arduino Uno. Crazy, right?! 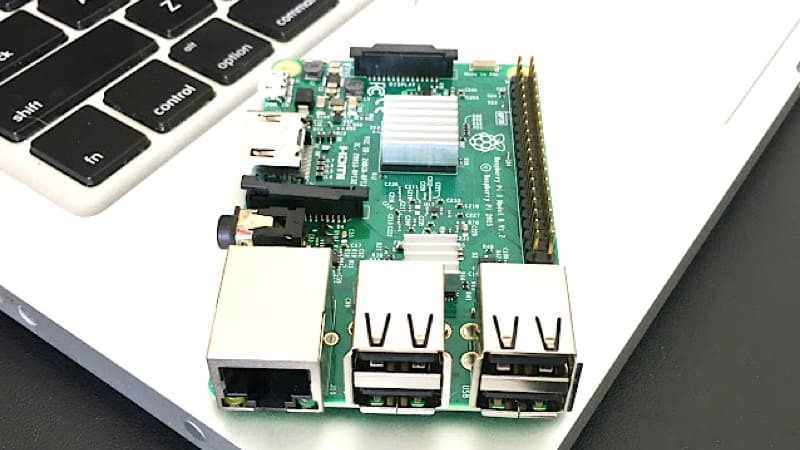 One of the biggest benefits of having a Raspberry Pi is that it’s a computer running a Linux-based Operating System. That means you can use the Raspberry Pi as you would a desktop computer. You can install programs, GUI’s, surf the web, and program in whatever language you like. This makes it a superb option for media centers, “smart” robots, and custom home automation systems.

If you want to create your custom kiosk or image, you can do that with the Raspberry Pi. It’s a small enough footprint with enough power to build real systems.

Furthermore, you can now get the Raspberry Pi 4, which offers more RAM, better processing, and support for dual 4K displays. It is legit.

Why you should use Raspberry Pi

You should use the Raspberry Pi if you have a project that is too complex for the Arduino or if you have more experience building systems on top of an Operating System. I also recommend using Raspberry Pi if you’re an intermediate maker looking to gain more advanced robotics skills. The Raspberry Pi will allow you to develop Facial Recognition algorithms, run OpenCV, code in Python, and develop applications in Node-RED. You can’t do these things in Arduino.

Now, let’s dive into the Arduino vs. Raspberry Pi price, their application to robotics, and which controller is better for the Internet of Things (IoT).

To begin with, an Authentic Arduino costs around $20 and about $10-$15 for a clone. The Raspberry Pi costs about $40. The difference in price for the Raspberry Pi is matched by a whole host of other features including a Linux-based Operating system, 500,000x more RAM, video output, camera input, and connectivity (LAN, Ethernet, and Bluetooth).

On the other hand, Arduino has less processing capability but more I/O including both Analog Inputs and Digital Inputs and Outputs that can drive up to 40 mA. The value of both of these boards is priceless because they provide a seamless way to create prototypes.

Before you select a controller on price alone, consider what you’re going to be doing with it. While the Arduino may seem like the cost-effective option, you’ll be limited to a single program running C++.

Now, let’s look at some applications using the Arduino and Raspberry Pi for robotics.

2. Arduino vs. Raspberry Pi for Robotics

If you’re trying to decide whether to use an Arduino vs. Raspberry Pi for robotics, you’ll want to first consider your level of programming and electronics ability. If you’re 100% brand-new to robotics, then Arduino is a less-confusing way to get started. However, if you have Linux or Python experience, but are new to robotics, Raspberry Pi might be slightly easier to try first.

I designed this Infographic to help you decide if you need an Arduino vs. Raspberry Pi for your robotics project. 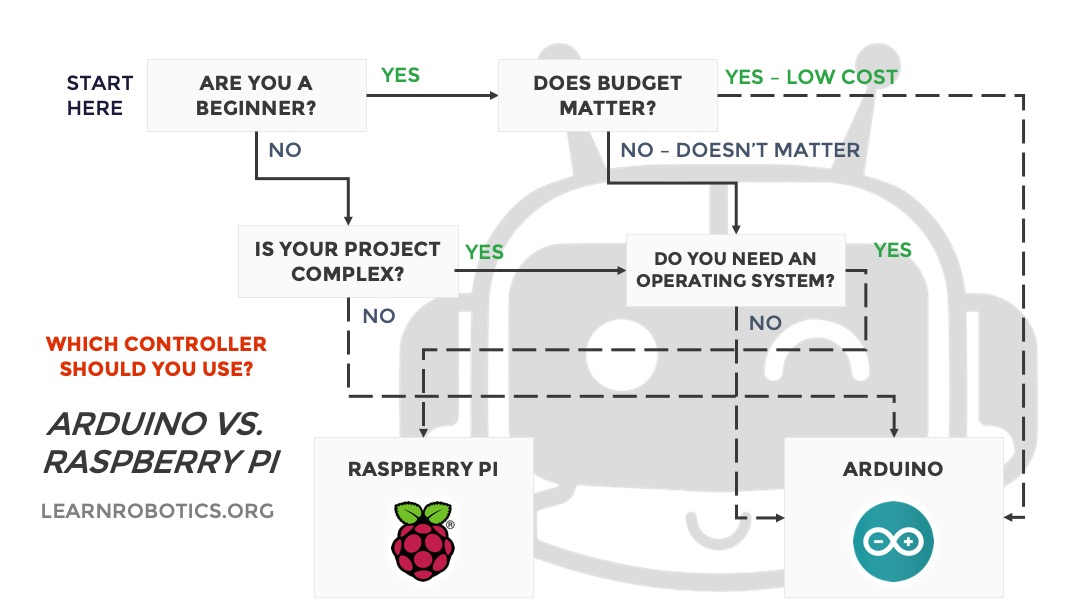 Want this chart? Enter your email below to download a free PDF copy!

Furthermore, if you have no prior experience in robotics or programming, Arduino is the best option. It’s a less confusing way to learn the parts of a robot and how motors and sensors work. Once you have the basics, you can learn how to design more sophisticated systems with the Raspberry Pi.

Now, if you’re starting from a more advanced level, you may want to use the Raspberry Pi to take advantage of programming in a variety of languages, ROS, FPV control, and object recognition with OpenCV. There are many more libraries and processing capabilities that you can do with a Raspberry Pi that you can’t do with an Arduino.

3. Arduino vs. Raspberry Pi for IoT

Internet of Things (IoT) projects are becoming more popular because of home automation trends. If you’re trying to decide whether to use an Arduino or a Raspberry Pi for IoT, then you’ll want to consider the following:

If you’re looking to create a device to measure temperature, then an Arduino is a practical option. If you want to create a full-fledge home automation system, then you’ll want to use a Raspberry Pi. It’s important to choose your controller based on how many I/O you’ll need, what language you want to program in, and how complex the system is.

Typically, the more complex the IoT project is, the more likely you’ll need a Raspberry Pi as the master controller. On the other hand, if you have a simple or single-program IoT project, then Arduino is probably the better option. You don’t want to select a controller that has too many or too little options or features for what you’re trying to do.

And the Winner is…

For Beginners and Simple Projects – Arduino

In most cases, you’ll want to use Arduino. I know someone will point out that you can use the Raspberry Pi for simple projects. And, yes, you certainly can. If all you have is a Raspberry Pi and you want to create a simple proof-of-concept, then, by all means, use what you have.

The low price point and shorter learning curve of Arduino make it appealing for most beginners and simple projects. You can’t beat making a robot or learning how to read sensors for less than $30. If you’re a teacher or student looking to get into robotics, then I can’t recommend Arduino enough.

On the other hand, if you have more advanced skills or you have a complex project, the Raspberry Pi is probably your best bet. Sure, you can add shields and accessorize the Arduino; however, if you need the ability to do advanced processing or have an Internet connection, then the Raspberry Pi provides this capability out of the box.

Regardless of which controller you pick, you’ll need to carefully consider your technical skills in comparison to how extensive the project you’re making is.

Finally, if you enjoyed this article, and are looking to get started with Arduino or Raspberry Pi, here are some articles I recommend checking out next.

Here are some popular Arduino Tutorials: 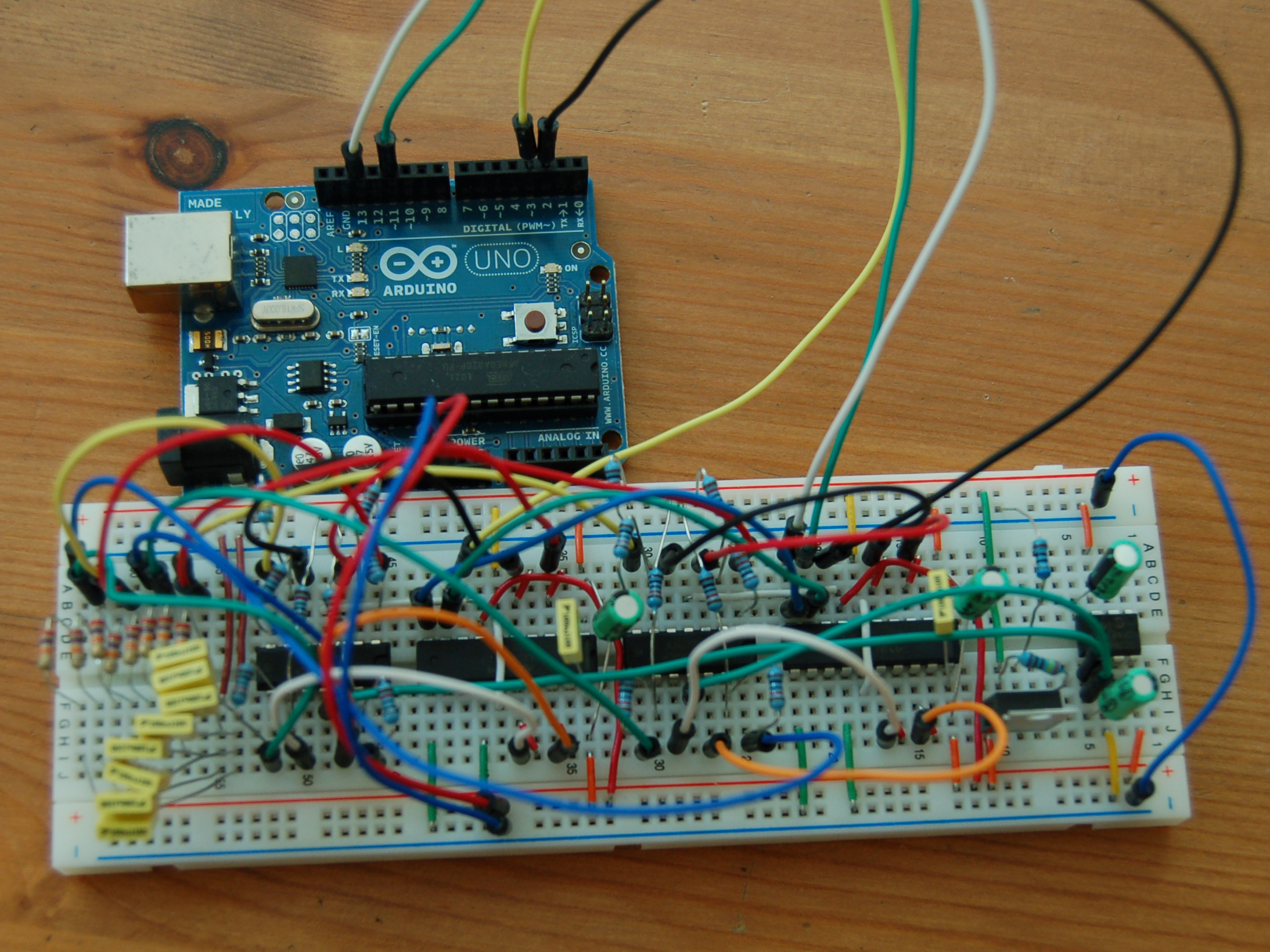 If you’re looking for Arduino Projects, try these: 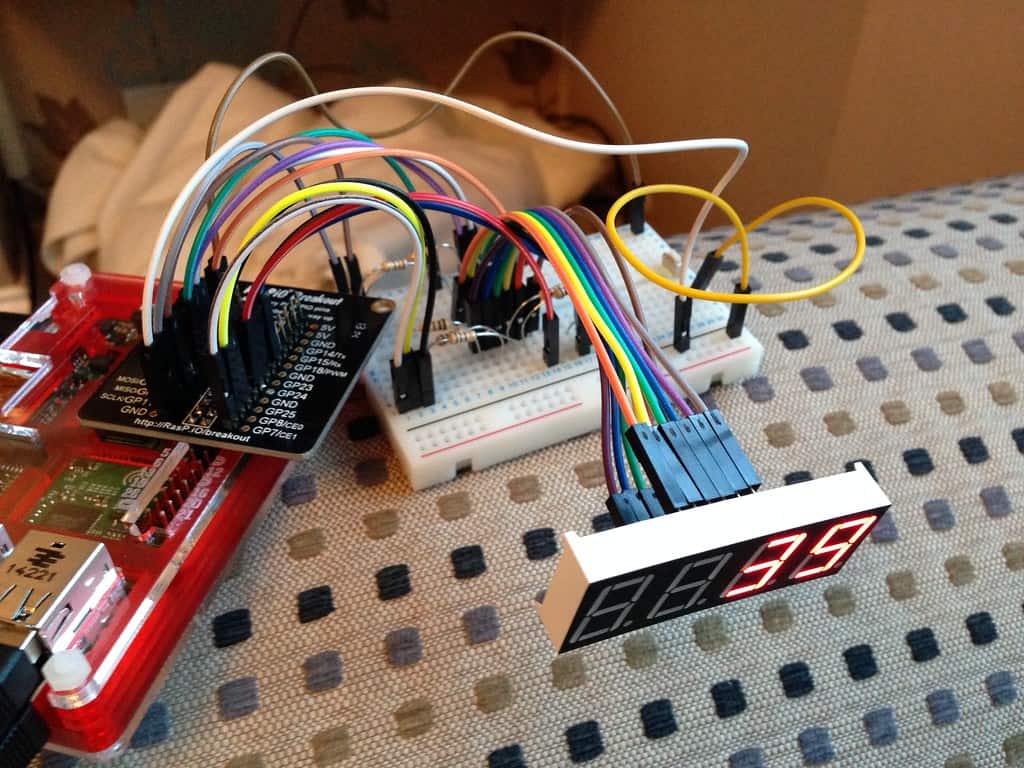 If you’re looking for Raspberry Pi Projects, try these:

Which controller are you going to use for your next robotics project? Leave a comment below, and let me know what you’re making!

Liz MillerLiz is the Founder of Learn Robotics. She holds a B.S. in Robotics Engineering from WPI. Liz has a multitude of robotics experiences ranging from being a Robotics Researcher at UPenn, Instructor at MIT, and Automation Engineer for United Technologies. Liz writes technical tutorials and creates automation courses that anyone can follow. Her tips and tricks help engineers grow their careers. Liz has authored over 150 pieces of unique content on this site. You can support her work here. Learn more about Learn Robotics on our About Us page.
Posted in:
Reviews
Tagged:
Arduino, education, Raspberry Pi, robotics, STEM