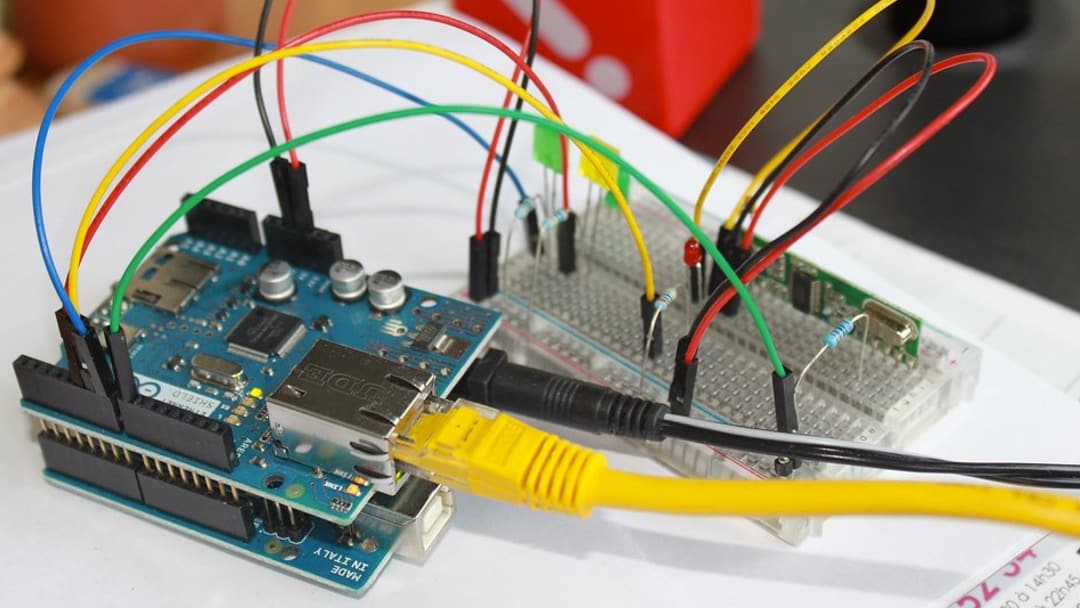 The Arduino Uno is a popular choice when it comes to creating electronic prototypes and robots. If you’re looking to build IoT projects, the Arduino Uno doesn’t have Wireless features out-of-the-box. That means you either have to add a Wifi Module, such as the ESP-01, or use a Wifi-enabled microcontroller, to begin with.

In this article, we’re going to explore five alternatives to the Arduino Uno that also have built-in WiFi chips.

If you’re just starting with electronics and coding, the Arduino Uno is my #1 recommendation for beginners.

Need help getting started with Arduino? You can sign up to take my coding & circuits course, here.

On the other hand, I wanted to provide this article as a resource. These are just some options when it comes to adding WiFi connectivity to a project.

Whether you choose to use these boards is completely up to you. In addition to the WiFi connectivity, most of these Arduino Uno alternatives come with a smaller footprint.

Let’s take a look at each of these alternatives. Then I’ll share some tips on how to decide which board is a good choice for your project. 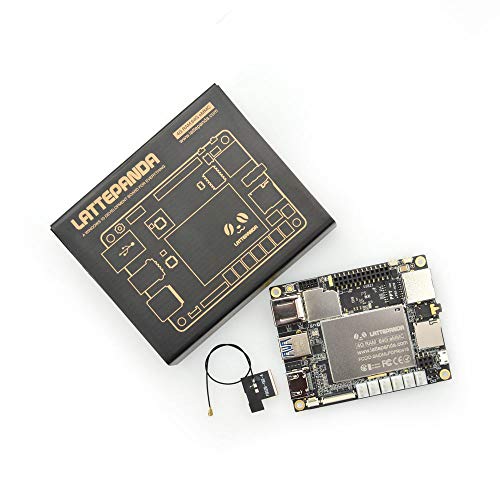 The NodeMCU is a popular breakout for the ESP8266 (ESP32) and ESP-12E Internet WiFi Development Board.

Here’s the pinout diagram for the NodeMCU. 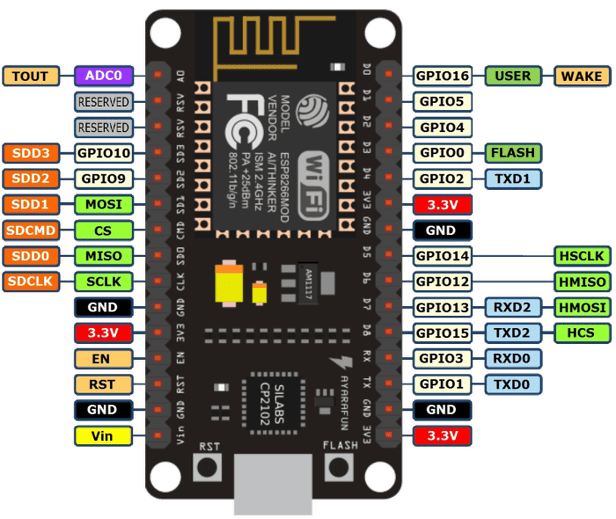 The NodeMCU makes connecting things easy because it’s an open-source firmware and development kit. It’s designed for IoT projects using Arduino-like hardware I/O. Plus, it costs less than $2 making it a cost-effective choice for prototyping. 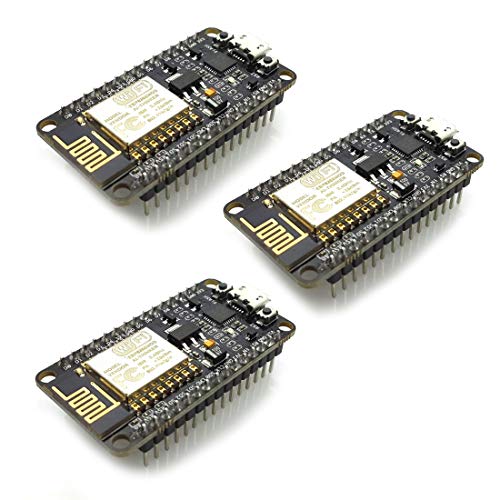 The NodeMCU is a popular choice for IoT prototyping; however, I only recommend using it if the devices you’re running only require 3V. Most 5V sensors will have to be powered separately if you want to get accurate measurements.

If you’re okay with adding a separate power source for your devices, you can get away with using a NodeMCU.

Otherwise, I recommend checking out the next Arduino Uno alternative: the Wemos D1 Mini.

My favorite IoT controller is the Wemos D1 Mini. It also uses an ESP8266, but in about half of the footprint of the NodeMCU. Plus, it comes with a variety of modular shields that are great for creating IoT prototypes on-the-fly.

Here’s the pinout diagram for the Wemos D1 Mini. 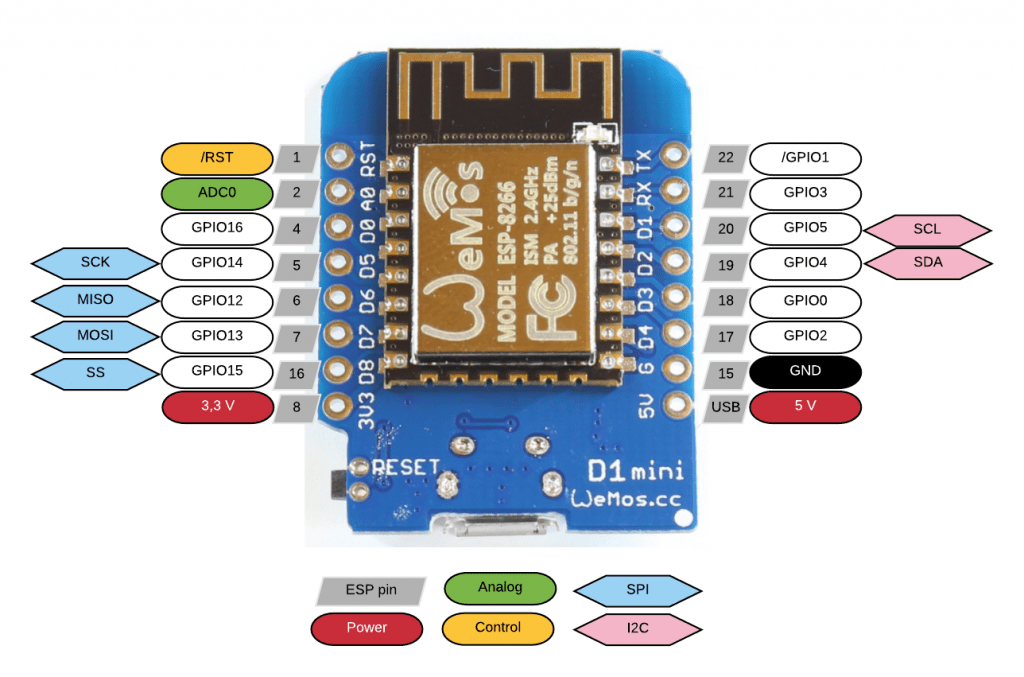 The Wemos D1 Mini has a 5V output pin, which means you can use standard input sensors without needing an external power supply.

When I was creating the Siri + ESP8266 project, using the NodeMCU, I had to bring in additional power because 3V wasn’t enough to gather accurate temperature readings.

Had I used a Wemos D1 Mini, I could have eliminated the extra power pack and kept the project footprint small and portable. 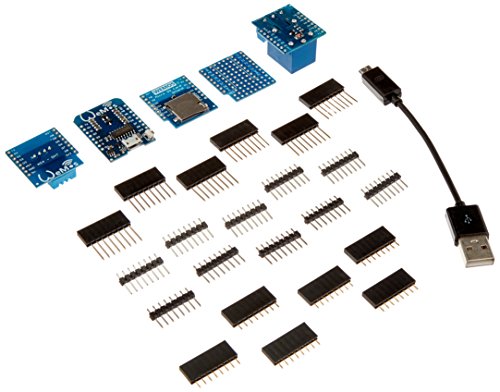 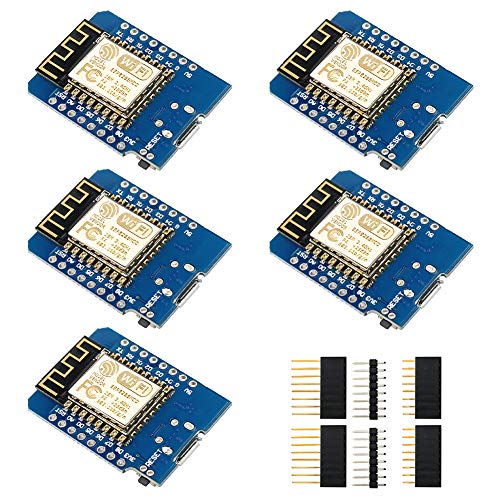 Related: What’s better: the NodeMCU or the Wemos D1 Mini?

An even smaller choice is the ESP-01 controller. This small WiFi Transceiver Module can be used with an Arduino Uno or as a standalone using a USB adapter board.

Here’s a pinout diagram for the ESP-01. 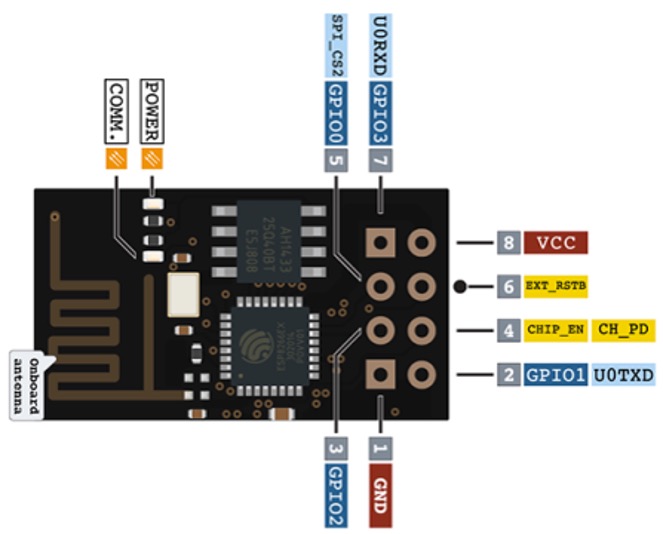 It has four built-in Digital PWM pins, which are sufficient for the smallest IoT projects. Plus, there’s a 3.3V power source.

I think the ESP-01 is a great option if you’re trying to keep your project small or you want to bring WiFi to an existing Arduino Uno project without much hassle.

Here’s a diagram on how to connect an ESP-01 to the Arduino Uno. 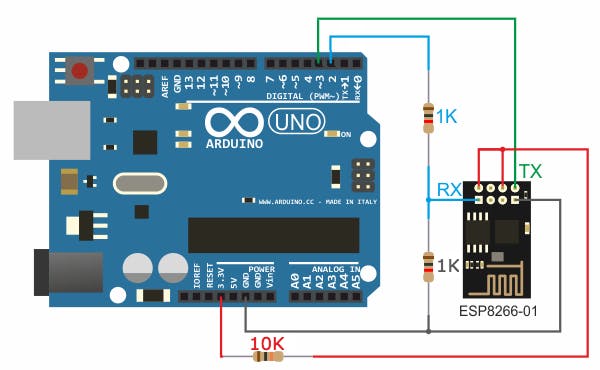 You can purchase the ESP-01 breakout board and Serial USB adapter board on Amazon. 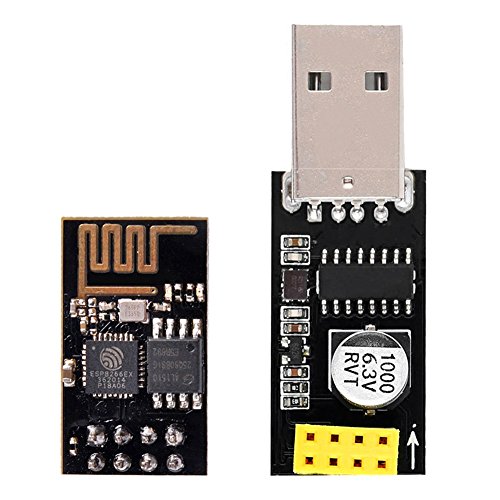 Here’s a pinout diagram for the Arduino Nano 33 IoT board. 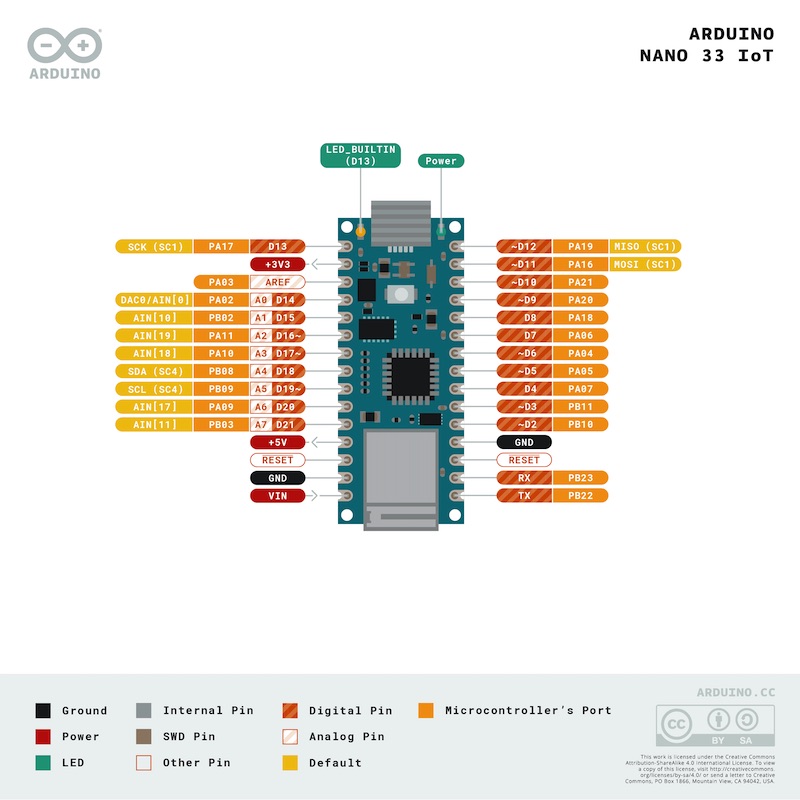 If you’re looking for Industrial-grade IoT security and want to work on a project with the Arduino IoT Cloud, the Nano 33 IoT, is a good option. The on-board DC-DC power supply enables the board to be powered up to 21V, which is just crazy for any class of Arduino controllers. If you have lots of devices that require a high current draw, you can run them without the risk of overheating.

In addition to IoT functionality, you can also configure both Bluetooth class and Bluetooth Low Energy (BLE) on the Bluetooth 4.0 standard.

The Arduino Nano33 IoT is fully compatible with the Arduino IoT Cloud and supports full TLS secure transport. It uses an ATECC608A “crypto chip”, which stores cryptographic keys in hardware, offering a very high level of security for the price.

Check out the Nano 33 IoT if you want the rugged features and security of working with Industrial equipment without the Industrial price. 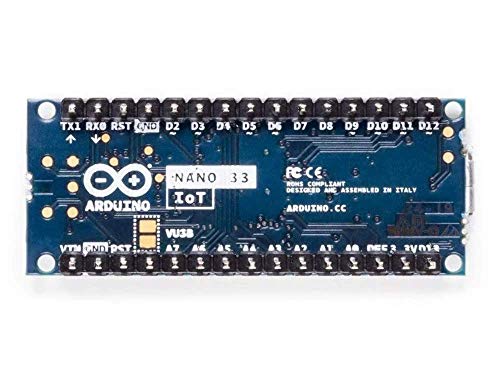 A step up from the Nano 33 IoT is the Arduino MKR1000. This controller is best for IoT and Smart Home applications. And, because it’s an official Arduino Product, it interfaces nicely with the Arduino IDE.

Here’s the pinout diagram for the Arduino MKR1000. 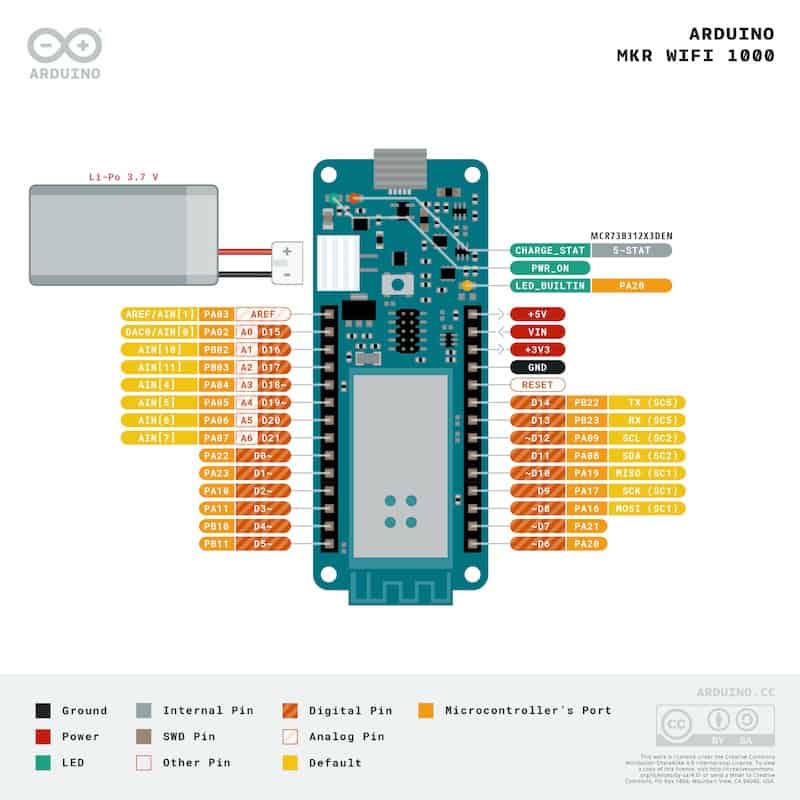 The form-factor of the MKR1000 is very familiar to the Arduino Uno. It even includes a wealth of Analog Inputs, which is a rarity to most WiFi-enabled boards.

If you’re trying to work with multiple sensors that require an analog input signal, the Arduino MKR1000 could be a good option.

“Arduino MKR1000 has been designed to offer a practical and cost-effective solution for anyone seeking to add WiFi connectivity to their projects with minimal experience in networking.”

The design includes a Li-Po charging circuit that allows the Arduino MKR1000 to run on battery power or external 5V, charging the Li-Po battery while running on external power.

The only drawback is that this controller doesn’t have Bluetooth built-in, but that can be easily added using a separate shield or chip. 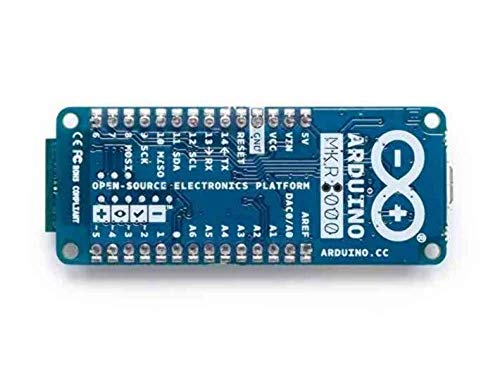 How to choose a WiFi Controller for Robotics Projects

When you’re trying to figure out what controller to use for your project, it’s important to map out the application and figure out the requirements.

Here are some key questions you should consider before choosing which controller to use:

Some of the Arduino Uno alternatives might be overkill for your application, but oftentimes speed and rapid-prototyping outweigh waiting for a smaller option.

The application is key and will dictate which controller is the best choice to use in your project.

Which of these wifi-enabled Arduino Uno alternatives have you used? Let me know in the comments below.

And if you enjoyed this article, consider sharing it on your favorite social media platform and feeding our caffeine addiction by sending us a coffee.

Liz MillerLiz is the Founder of Learn Robotics. She holds a B.S. in Robotics Engineering from WPI. Liz has a multitude of robotics experiences ranging from being a Robotics Researcher at UPenn, Instructor at MIT, and Automation Engineer for United Technologies. Liz writes technical tutorials and creates automation courses that anyone can follow. Her tips and tricks help engineers grow their careers. Liz has authored over 150 pieces of unique content on this site. You can support her work here. Learn more about Learn Robotics on our About Us page.
Posted in:
Internet of Things, Technology

Designed for all backgrounds